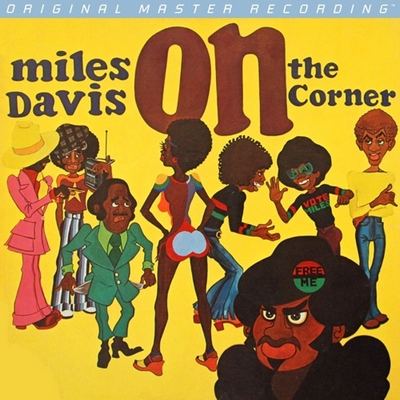 Could there be any more confrontational sound in Miles Davis’ vast catalog than the distorted guitars and tinny double-timing drums reacting to a two-note bass riff funking it up on the first track from On the Corner? Before the trumpet even enters the story has been broken off in the middle — deep street music melding with a secret language exchanged by the band and those who can actually hear it as music. Here are killer groove riffs that barely hold on as bleating trumpet and soprano sax lines (courtesy of Dave Liebman on track one) interact with John McLaughlin’s distortion-box frenzy. Michael Henderson’s bass keeps the basic so basic it hypnotizes; keyboards slowly enter the picture, a pair of them handled by Herbie Hancock and Chick Corea, as well as Ivory Williams’ synthesizer. Finally, Colin Walcott jumps in with an electric sitar and there are no less than five drummers — three kits (Al Foster, Billy Hart, and Jack DeJohnette), a tabla player, and Mtume. It’s a four-tune suite, On the Corner is, but the separations hardly matter, just the shifts in groove that alter the time/space continuum. After 20 minutes, the set feels over and a form of Miles’ strange lyricism returns in “Black Satin.” Though a tabla kicks the tune off, there’s a recognizable eight-note melody that runs throughout. Carlos Garnett and Bennie Maupin replace Liebman, Dave Creamer replaces McLaughlin, and the groove rides a bit easier — except for those hand bells shimmering in the background off the beat just enough to make the squares crazy. The respite is short-lived, however. Davis and band move the music way over to the funk side of the street — though the street funkers thought these cats were too weird with their stranded time signatures and modal fugues that begin and end nowhere and live for the way the riff breaks down into emptiness. “One and One” begins the new tale, so jazz breaks down and gets polished off and resurrected as a far blacker, deeper-than-blue character in the form of “Helen Butte/Mr. Freedom X,” where guitars and horns careen off Henderson’s cracking bass and Foster’s skittering hi-hats. It may sound weird even today, but On the Corner is the most street record ever recorded by a jazz musician. And it still kicks. ― Allmusic