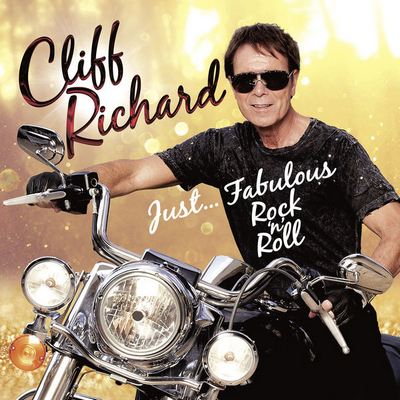 In 1958, Cliff Richard became the first real-deal British rock star when his debut single “Move It” became a massive hit in the U.K. Compared to most of the first crop of English rock & rollers, Richard seemed at least a reasonable approximation of the genuine article imported from the United States. By the time the Beatles changed the game in the early ’60s, Richard had already begun easing into more polished and less threatening sounds, and through most of his career he’s been an all-purpose pop star, dividing his time between secular and Christian music when not busy with television appearances. But Richard still takes a stubborn pride in his status as a British rock pioneer, and at the age of 76 (a mere 58 years after “Move It”), he’s released a collection of first-era rock & roll tunes performed in vintage style titled Just….Fabulous Rock ‘n’ Roll. Recorded in Nashville with a studio band clearly conversant in vintage rock and R&B, Just….Fabulous Rock ‘n’ Roll reveals Richard’s voice is in remarkably good shape for a man his age, and his instrument and his instincts serve him well here. However, this album suffers the same pitfall that trips up so many artists when they tackle an album of covers. Richard clearly enjoys this material, but he can only bring so much that’s new to these songs, and he doesn’t have a strong enough musical personality to keep one from remembering the originals — and competing vocally with the likes of Elvis Presley, Chuck Berry, Sam Cooke, Jerry Lee Lewis, or Little Richard is a game where very few singers can win. (The album opens with an electronic duet between Richard and Presley on “Blue Suede Shoes,” and it unfortunately makes clear that Richard was called “the British Elvis” more for good hair and stage presence than for being able to convincingly snarl.) And while an updated version of “Move It” shows Richard has his chops, it seems placid next to the classic original. Richard unexpectedly brings a bit of his own spirit to a sly cover of John Lee Hooker’s “Dimples” (he also recruited Peter Frampton to play some strong guitar on the track), and two new songs in the classic rock & roll style fare well because they’re not competing with the listener’s memories. Perhaps Richard should have recorded a whole album of “new” vintage rock numbers; as it is, Just….Fabulous Rock ‘n’ Roll is well crafted, but not an especially inspiring effort in rock nostalgia. ― Allmusic