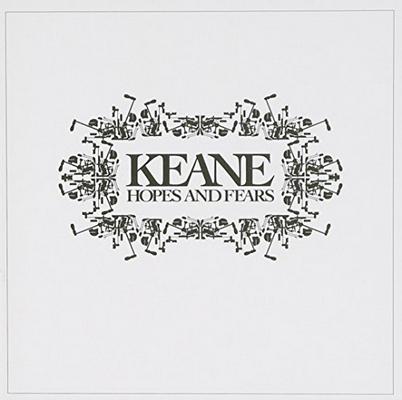 The English music press can never let anyone be. They’re always quick to hail the next big thing, and in this case, the next big Coldplay is Keane. (Lowgold briefly held that title upon its debut release in 2001, but U.K. critics rushed to give that crown to someone else.) Keane haven’t positioned themselves to be kings of anything, though, let alone the next Coldplay. Sure, Coldplay’s biggest hit to date, “Clocks,” included only pianos, and they released the Safety EP on Fierce Panda, which is also Keane’s label, but those are the only things Keane have in common with Coldplay. Alongside their beautiful, emotive dalliance of instrumentation is one thing that’ll separate Keane from all the rest, and that’s drive. The band’s open-hearted ambition on Hopes and Fears is audible on every song. Lead vocalist Tom Chaplin’s rich vocals are as vibrant as any choir, and track such as “This Is the Last Time,” “Bend and Break,” and “Can’t Stop Now” reflect Keane’s more savory, dramatic moments. Confidence bursts throughout, and for a band that has been around seven years and has never released a studio full-length album until now, achieving nearly epic-like status is quite impressive. Keane obviously have the songs and they have a strong voice leading the front; however, Tim Rice-Oxley (piano/keyboards/bass) and Richard Hughes (drums) allow Hopes and Fears to come alive with glamour and without the sheen of slick studio production. Even slow build-up tracks like “Bedshaped” and “We Might as Well Be Strangers” are just as passionate, if not more so, than some of the bigger numbers on the album. Some might find Keane’s debut a bit stagy, or too theatrical at first, but that’s okay. Listening to “Somewhere Only We Know” alone a few times is more than enough to convince you that Keane stand next to Coldplay — challenging them rather than emulating — and it’s a respectable match at that. ― Allmusic