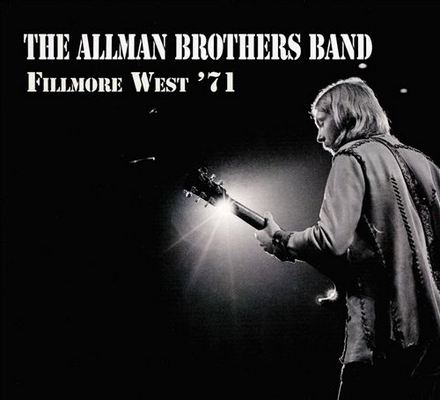 Six weeks before the Allman Brothers Band played the shows immortalized on At Fillmore East, they played three gigs at Bill Graham’s left coast venue, the Fillmore West, in San Francisco in January of 1971. They were slotted between openers the Trinidad Tripoli Steel Band and Hot Tuna. These three shows are presented in their entirety in a four-disc set. Sourced from original two-track, reel-to-reel soundboard masters, they were held in ABB crew members Twiggs Lyndon’s, Joe Dan Petty’s, and Mike Callahan’s closets for nearly five decades. They were then acquired by archivist Kirk West, who set the painstaking restoration process in motion. The quality here, while very good throughout, is muddy in some spots (mostly on disc two). In addition to the complete shows, West added a 45-minute “Mountain Jam” from March of 1970 at the Warehouse in New Orleans to disc four to fill it out.

A revelation of these recordings is what they say about the Allmans’ development and how much more polished they were just six weeks later, which doesn’t diminish the earlier dates one iota: These performances are absolutely electrifying. They are wooly and intensely exploratory. Disc one, from January 29, starts with three relatively short tunes as standard openers: “Statesboro Blues,” “Trouble No More,” and a funky “Don’t Keep Me Wonderin’.” All are showcases for Gregg Allman’s peak vocal performances. The modal jazz-rock of Dickey Betts’ “In Memory of Elizabeth Reed” is fourth; the band’s raw approach is evident in the fast and furious interplay between Duane Allman and Betts. The muddy state of the aged original tapes shows on “Midnight Rider,” though the performance is solid. Three long jams that showcase the Allmans spiraling improv and gritty approach to blues follow with a breezy, labyrinthine “Dreams,” a spiky “You Don’t Love Me” (with killer organ), and of course, the nearly 19-minute jam orgy “Whipping Post.” The set list doesn’t vary much night to night, but the performances all have unique moments. “Midnight Rider” gets dropped from the second evening and replaced with a slow-burning, nine-minute “Stormy Monday,” where Duane’s explosive slide solo ratchets up the tension before Betts’ answers with a stinging, jagged attack of his own. On January 31, “Midnight Rider” returns, appended by a burning read of Willie Dixon’s “Hoochie Coochie Man” sung by bassist Berry Oakley (whose playing throughout adds depth and dimension to his legend). The show ends on disc four with a killer “Hot ‘Lanta,” a wild improv on “Whipping Post,” as an encore, and the epic-length bonus “Mountain Jam,” with a lengthy drum duel from Butch Trucks and Jaimoe, and an inventive solo by Oakley. The front cover features an unpublished, iconic photo of Duane by photographer Jim Marshall, adding mystique to the package. Despite the minor flaws in the sound on some of this, Allman Brothers Band fans will find these kinetic performances essential, and likely even revelatory. ― Allmusic