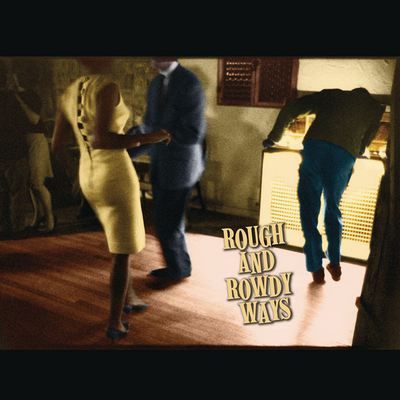 Bob Dylan released the dark, unruly Time Out of Mind in 1997 following two albums of folk and blues covers. It was his first original material in a decade and summed up his 20th century. Rough and Rowdy Ways is his first new material since 2012’s Tempest and arrives during a global pandemic and the righteous struggle for racial and economic justice. These ten songs revel in forms that have been Dylan’s métier since the ’60s: blues, country, folk, rockabilly, gospel, etc. Its three pre-release singles — “Murder Most Foul,” “I Contain Multitudes,” and “False Prophet” — are showcases for a songwriter who speaks directly yet remains elusive.

“I Contain Multitudes” is a meditation on a life yet unfolding; historic figures — Anne Frank, William Blake, the Rolling Stones, etc. — jostle against archetypes of gunslingers: “…What can I tell ya? I sleep with life and death in the same bed….” “False Prophet” is a jeremiad disguised as blues house rocker. The protagonist testifies; he’s a witness who confronts evil in history and real time. “Goodbye Jimmy Reed” celebrates the bluesman in his own house-rocking style to equate religion, sin, and redemption with romantic obsession and sex. “Crossing the Rubicon” is a roadhouse blues with the afterlife riding shotgun: “Three miles north of purgatory/One step from the great beyond/I pray to the cross/I kiss the girls/and I cross the Rubicon….” Dylan’s band are loose and joyful; their raucousness carries his swagger and joy. The suspenseful, loungey “My Own Version of You” features grave robbing as it employs the inspiration of the Bride of Frankenstein to seek truth in taboo. “I’ve Made Up My Mind to Give Myself to You,” caressed by marimbas, and brushed snares, finds Dylan blurring distinctions between carnal and spiritual love. Conversely, “Black Rider” whistles past the graveyard, with a nasty caution: “… Don’t hug me, don’t turn on the charm/I’ll take a sword and hack off your arm….” In the Celtic gospel of “Mother of Muses,” he’s a grateful supplicant, a servant who humbly requests transformation knowing full well he may not be entitled: “… wherever you are/I’ve already outlived my life by far….”

The album’s final half-hour contains only two songs. The nine-plus-minute “Key West (Philosopher Pirate)” is a rambling dirge guided by a soft accordion in a stripped-down journey of longing and weariness; an acknowledgment of mortality with the ghosts of the Beats, Buddy Holly, and Jimi Hendrix alongside him. It stands with his best work from the ’70s. That gentle sojourn prepares listeners for “Murder Most Foul,” a sprawling, 17-minute lyrical, labyrinthian closer that moves through history, metaphor, and culture with JFK’s assassination as its hub. It will be decoded for generations. Rough and Rowdy Ways is akin to transformational albums such as Love and Theft, and Slow Train Coming. It’s a portrait of the artist in winter who remains vital and enigmatic. At nearly 80, Dylan’s pen and guitar case still hold plenty of magic. ― Allmusic