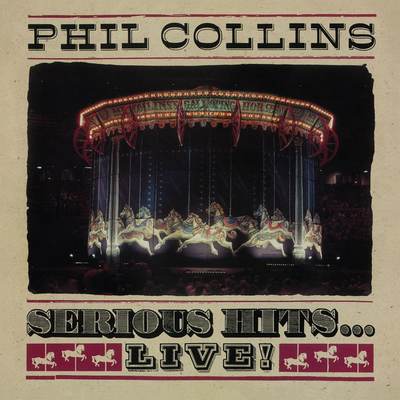 Along with being a multi-talented musician and an excellent songwriter, Phil Collins is one of the best live performers in rock. His songs usually stay true to their original form, he puts plenty of fire into his vocals, and best of all, every one of his in-concert qualities transfers well into album form. Serious Hits…Live! is a wonderful example of this, with not only 15 tracks, but 15 of Phil’s best tracks, performed with an overcharged amount of enthusiasm and energy. There’s an equal number of ballads and fast songs on the album, but even on the slow stuff, Collins puts a lot of passion and feeling into the lyrics. Efforts such as “One More Night,” “Do You Remember?,” and especially his best ballad, “Against All Odds (Take a Look at Me Now)” are heartfelt and unhindered. His moods shift easily without any false emotional dramatics, which in turn enhances the ambience of the songs. The tracks are taken from a number of shows during his Serious Tour in 1990, but his performance level remains enthusiastic the whole album through and the change of venues goes unnoticed, which is again another plus. Collins is just as sharp on the quicker tunes, with some wonderful percussion filling in behind him. The drumming is stellar on “Easy Lover” and again on “Sussudio,” but the album’s only downfall is its lack of credits, leaving the identities of the musicians a mystery. The album makes up for this with a spine-chilling version of “In the Air Tonight” as Collins does a good job of capturing the song’s haunting air, and from here the album switches gears with “You Can’t Hurry Love” but doing so with undefiled perfection. Almost all of the songs here broke Billboard’s Top Ten, and five of these tracks hit number one, which makes Serious Hits…Live! truly live up to it’s name. ― Allmusic