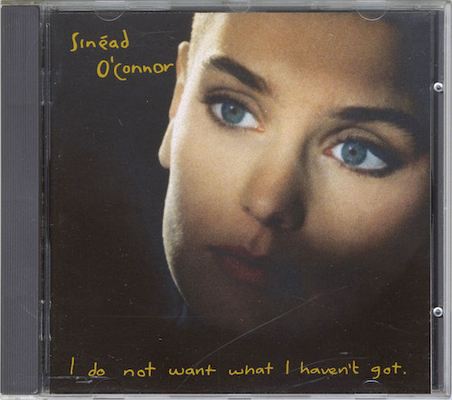 I Do Not Want What I Haven’t Got became Sinéad O’Connor’s popular breakthrough on the strength of the stunning Prince cover “Nothing Compares 2 U,” which topped the pop charts for a month. But even its remarkable intimacy wasn’t adequate preparation for the harrowing confessionals that composed the majority of the album. Informed by her stormy relationship with drummer John Reynolds, who fathered O’Connor’s first child before the couple broke up, I Do Not Want What I Haven’t Got lays the singer’s psyche startlingly and sometimes uncomfortably bare. The songs mostly address relationships with parents, children, and (especially) lovers, through which O’Connor weaves a stubborn refusal to be defined by anyone but herself. In fact, the album is almost too personal and cathartic to draw the listener in close, since O’Connor projects such turmoil and offers such specific detail. Her confrontational openness makes it easy to overlook O’Connor’s musical versatility. Granted, not all of the music is as brilliantly audacious as “I Am Stretched on Your Grave,” which marries a Frank O’Connor poem to eerie Celtic melodies and a James Brown “Funky Drummer” sample. But the album plays like a tour de force in its demonstration of everything O’Connor can do: dramatic orchestral ballads, intimate confessionals, catchy pop/rock, driving guitar rock, and protest folk, not to mention the nearly six-minute a cappella title track. What’s consistent throughout is the frighteningly strong emotion O’Connor brings to bear on the material, while remaining sensitive to each piece’s individual demands. Aside from being a brilliant album in its own right, I Do Not Want What I Haven’t Got foreshadowed the rise of deeply introspective female singer/songwriters like Tori Amos and Sarah McLachlan, who were more traditionally feminine and connected with a wider audience. Which takes nothing away from anyone; if anything, it’s evidence that, when on top of her game, O’Connor was a singular talent. ― Allmusic