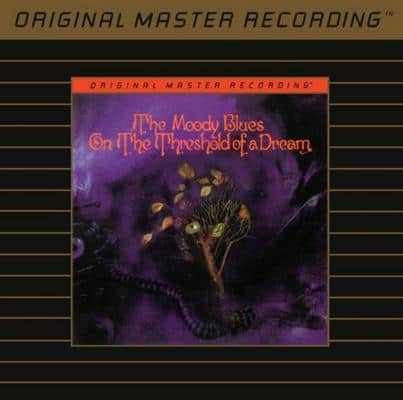 On the Threshold of a Dream was the first album that the Moody Blues had a chance to record and prepare in a situation of relative calm, without juggling tour schedules and stealing time in the studio between gigs — indeed, it was a product of what were almost ideal circumstances, though it might not have seemed that way to some observers. The Moodies had mostly exhausted the best parts of the song bag from which their two preceding albums, Days of Future Passed and In Search of the Lost Chord, had been drawn, and as it turned out, even the leftover tracks from those sessions wouldn’t pass muster for their next long-player project — but those albums had both been hits, and charted well in America as well as England, and had overlapped with a pair of hit singles, “Nights in White Satin” and “Tuesday Afternoon,” on both sides of the Atlantic. Their success had earned them enough consideration from Decca Records that they could work at their leisure in the studio through all of January and most of February of 1969; what’s more, with two LPs under their belt, they now had a much better idea of what they could accomplish in the studio, and write songs with that capability in mind. Equally important, they’d just come off of an extensive U.S. tour (opening for Cream) and had learned a lot in the course of concertizing over the previous year, achieving a much bolder yet tighter sound instrumentally as well as vocally, and they could now write to and for that sound as well. So this album is oozing with bright, splashy creative flourishes in two seemingly contradictory directions that somehow come together as a valid whole. On the original LP’s first side (which was the more rock-oriented side), the songs “Lovely to See You,” “Send Me No Wine,” “To Share Our Love,” and “So Deep Within You” all featured killer guitar hooks (electric and acoustic) and fills by Justin Hayward; beautiful, muscular bass from John Lodge; and vocal hooks everywhere. It’s also a surprisingly hard-rocking album considering the amount of overdubbing that went into perfecting the songs, including cellos, wind and reed instruments, and lots of vocal layers — yet it even found room to display a pop-soul edge on “So Deep Within You” (a number that the Four Tops later recorded).

Side two was the more overtly ambitious of the two halves — after a pair of songs dominated by acoustic guitar and heavy Mellotron, “Never Comes the Day” and “Lazy Day” (the latter a piece of social commentary showing that Ray Thomas, at least, still remembered his roots in Birmingham), the remainder of the record was devoted to the most challenging body of music in the group’s history. Justin Hayward’s deliberately archaic “Are You Sitting Comfortably?,” a piece that sounds almost 400 years out of its own time, evokes images out of medieval and Renaissance history laced with magic and mysticism, all set to Hayward’s acoustic guitar and Thomas’ flute, leading into Graeme Edge’s poetic contribution, “The Dream,” accompanied by Mike Pinder’s Mellotrons in their most exposed appearance to date on a record. And all of that flows into Pinder’s three-part suite, “Have You Heard, Pt. 1″/”The Voyage”/”Have You Heard, Pt. 2,” a tour de force for the band — check out Edge’s and Lodge’s rock-solid playing on “Have You Heard” — and for Pinder, whose Mellotrons, in conjunction with Thomas’ flute and supported by some overdubbed orchestral instruments, push the group almost prematurely into the realm of progressive rock. This synthesis of psychedelia and classical music, including a section featuring Pinder on grand piano, may sound overblown and pretentious today, but in 1969 this was envelope-ripping, genre-busting music, scaling established boundaries into unknown territory, not only “outside the box” but outside of any musical box that had been conceived at that moment — perhaps it can be considered rock’s flirtation with the territory covered by works such as Alexander Scriabin’s Mysterium, and if it overreached (as did Scriabin), well, so did a lot of other people at the time, including Jimi Hendrix, the Doors, the Who, et al. To show the difference in the times, the Moodies even brought this extended suite successfully to their concert repertory, and audiences devoured it at the time. Amazingly, On the Threshold of a Dream was their first chart-topping LP in England, and remained on the charts for an astonishing 70 weeks, a feat made all the more remarkable by the fact that the accompanying single, “Never Comes the Day” b/w “So Deep Within You,” never charted at all. ― Allmusic