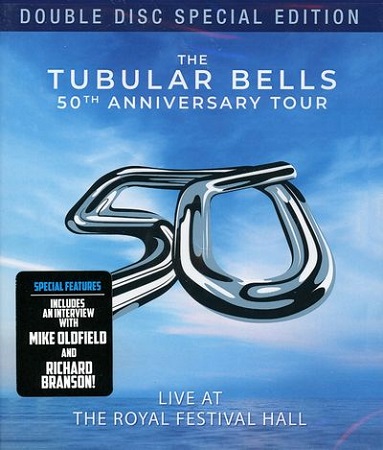 Mike Oldfield’s iconic Tubular Bells took the world by storm in 1973 and continues to sell over 100,000 albums annually, totaling over 17.5 million copies sold worldwide and 18 million streams. The 50th-anniversary celebration of his masterpiece continues with this incredible 4K live concert recording with dance and acrobatic feats by the Circa Contemporary Circus at London’s infamous Royal Festival Hall in London, with Samuel West as MC.

BD 1 – Full Live Show
Filmed over three nights at the world-famous Royal Festival Hall, this contemporary masterpiece incorporates the beauty of the original music with dance and acrobatic feats by the Circa Contemporary Circus. Includes stunning performances of Moonlight Shadow, Mike Oldfield’s single hit, along with Summit Day, from his Guitars album, and The Gem, a new work by Musical Director Robin Smith.

BD 2 – Tour Documentary
The feature-length documentary explores the history and legacy of Tubular Bells, and closely follows the dramatic story behind the spectacular new production.
Special Features: Includes an interview with Mike Oldfield and Richard Branson!