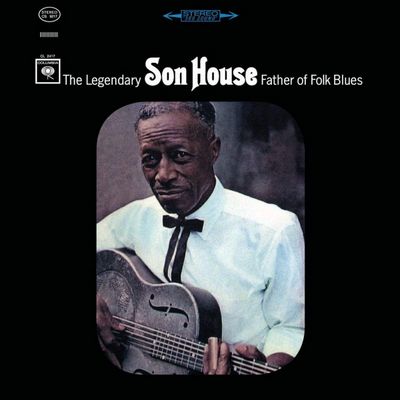 This was the first such presentation of a Delta blues musician done by Columbia, which seemed like a pretty hip label at the time, since they had both Bob Dylan and Paul Revere and the Raiders. The man’s picture on the front is mesmerizing, in a word; the white shirt, black string tie, and silver steel guitar just adding to the excitement. Perhaps this album picture was the first glimpse many young listeners had of such a style of guitar. It was decades before Dire Straits appropriated the image. Revisionist critical thinking has it that the later recordings by Son House can’t match the music created during his ’30s sessions for Paramount. Here, of course, we have the music as sports syndrome, an area where the elderly are always going to fail in someone’s eyes. So much of music enjoyment, however, is a subjective reaction that so often involves many other factors, among them time and place. The sound of the metal slide quietly hovering over the strings can bring to mind only one thing in the mind of a westerner: an angry rattlesnake. And the way many listeners’ jaws dropped upon hearing music such as this for the first time may not be quite as intense as a hiker’s facial expression upon encountering such a creature, but it is close enough. There is a second blues legend appearing here as well. Guitarist and harmonica player Al Wilson was a founding member of Canned Heat, and a musician so good at what he did that he became a sterling example of the possibility that young white blues fans could actually learn to play this music really well, with intensity. The original pressing contains nine tracks, each of them gems. The length some of the tracks are allowed to go to is really wonderful. One of them is more than nine minutes long. Producers of country blues material in the 21st century would probably frown on such a thing because they are guilty of helping water the genre down over the years. The inevitable repackaging of material from these recording sessions in the ’90s contained alternate takes, a decision that picks open arguments about whether the old man’s playing at that time really warranted hearing every take, or, in fact, whether such documentation is really even that important in a genre such as blues. However one feels about such controversial subjects, it definitely seems like producer John Hammond picked the right tracks the first time out. ― Allmusic