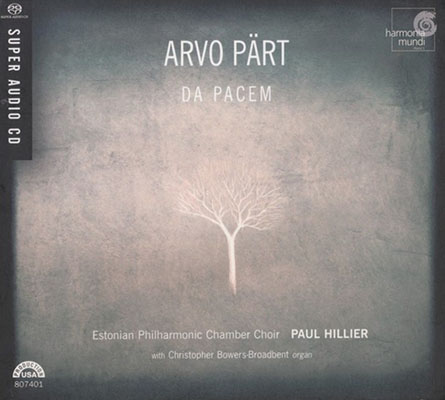 This collection of short works by Arvo Pärt features a cappella music and some lightly accompanied by an organ. Conducting the Estonian Philharmonic Chamber Choir is Paul Hillier, one of Pärt’s most celebrated interpreters and the author of a book-length study of his music. Hillier came to Pärt from the field of early music, and in his notes he stresses affinities between Pärt and the composers of medieval and Renaissance eras. Pärt rarely uses music to directly illustrate the text, for example. Instead, just as a composer of five centuries ago might do, he selects a pitch environment and elaborates it through the placement and manipulation of sonorities. Hillier points out Pärt’s liking for chains of first-inversion chords and for the so-called Landini cadence, linking those to music of the fourteenth century, especially in England. The comparison to pre-Renaissance English music is a good one more generally as well: Pärt can be very quiet, and his music does bring to mind, as Hillier says of the opening Da pacem Domine, stones placed with exquisite care in a Zen garden. But he also has a grand manner that can’t be described as minimal; even in small-scale pieces like these there are moments where he brings forces together to heighten the music’s intensity. The effect is like that of music by Leonel Power and the other composers of the Old Hall manuscript: stark, but also big at times. ― Allmusic