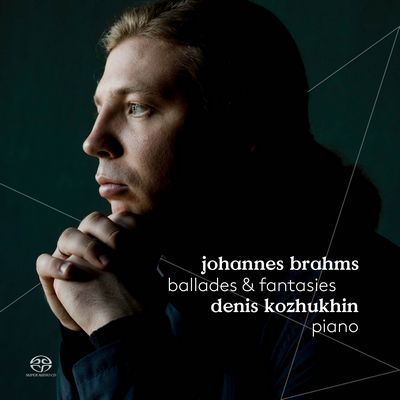 By turns placid, sparse, restive and impassioned, the highly personal and contemplative late piano pieces of Brahms have been described as “the mirrors of his soul”. The seven pieces comprising the Fantasias, Op. 116 are quite different in mood but are nevertheless intricately constructed to produce poetic miniatures of great depth and sonority, requiring sensitive artistry to convey their sense of unity and poignancy.

Brahms is in a more full-bloodied and demonstrative mood with the four character pieces in the much earlier Ballades, Op 10. But these too show moments of transcendent beauty as in the closing ballade where the tenor melody is woven into the mellifluously undulating pianissimo accompaniment. And in the rarely heard Theme and Variations, Op. 18b, Brahms makes a sumptuous and instantly seductive arrangement of the second movement of his own String Sextet, producing an arresting and magisterial work with exquisite tone colorations and a hushed, sublime ending. “Technically flawless and musically imperious” wrote Classical Source of Denis Kozhukhin, “his detail and articulation was immaculate, and his daredevil playing was thrilling … Kozhukhin was a knockout.”
Since winning the prestigious Queen Elisabeth Competition in Brussels in 2010, the young Denis Kozhukhin is one of the most sought after pianists on the international stage and in 2015 he signed an exclusive contract with Pentatone.

Kozhukhin’s first recording with Pentatone of the Grieg and Tchaikovsky’s Piano concertos was widely praised. Radio Bremen hailed him as “…already one of the greats of the black and white keys”. Gramophone magazine named the release ‘Editor’s Choice’ for May 2016, noting “Above all, [Kozhukhin] is natural … His inerrant rhythmic sense is pliant yet taut; his sound unalloyed silver. Listening to Kozhukhin, you’re left with one thing: the music – incontestable, complete.” And The Herald Scotland was unequivocal. “If you want to add these old warhorses to your music library, however, there are few better places to start than here… [Pentatone] uses the slogan ‘Sit back and enjoy’, and that is the way to appreciate a recording that could hardly be better for its balanced capturing of the performances.” ― Pentatonemusic.com