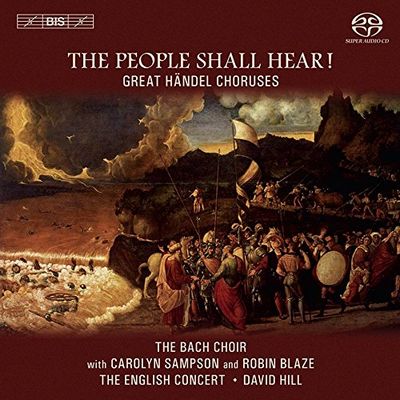 Despite the fact that he wrote a large number of operas and instrumental works, Handel is often perceived as a choral composer – or, more specifically, as the composer of the Hallelujah chorus. That particular piece is of course included on the present disc – as is He saw the lovely youth from Theodora, which Handel himself is reported to have preferred to Hallelujah, and indeed to all of his other choruses. Spanning in time from Zadok the Priest, one of the four Coronation Anthems of 1727, to the aforementioned ‘He saw …’ composed in 1750, this programme consists largely of great moments from Handel’s oratorios, but also from odes such as Alexander’s Feast and L’Allegro, il Penseroso ed il Moderato. The latter work is represented by Or let the merry bells, in which the lively soprano solo (sung by Carolyn Sampson), accompanied by a sparkling carillon, is lulled to sleep by the choir. Counter-tenor Robin Blaze also make a guest appearance, singing the alto solo in The mighty pow’r from Athalia. But on this disc of ‘Great Handel Choruses’ the limelight belongs to the choir, and a great choir it is! With its more than 200 active members, The Bach Choir is an institution in the golden British oratorio tradition, its musical directors including Ralph Vaughan Williams, Sir David Willcocks, and now David Hill, who conducts it on this recording. The choir and soloists are supported by The English Concert, one of the world’s foremost baroque orchestras, adding a wide palette of instrumental colours in large set pieces like Zadok the Priest as well as in the gently sensual and intimate May no rash intruder, the so-called ‘Nightingale Chorus’, with flutes imitating birdsong. ― bis.se