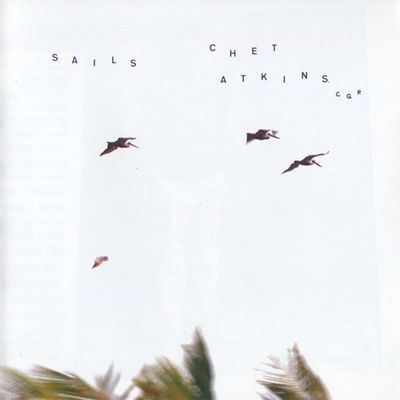 Another of Chet Atkins’ attempts to break into the jazz world during his Columbia period, this recording veers well across the line into new age wallowing of the most innocuous kind. At this point in time, when a record opened with soothing ocean waves, followed by a gentle wash of synths, you could pretty much expect the new age to be lapping at your feet throughout As he has with so many other genres, Atkins displays an instinctive grasp of this feel-good idiom, though he has to hold back his powers of invention to conform to its clichés and repetitions. Yet even amidst the twittering sound effects and electronic drums of “Up in My Treehouse” and the listless treatment of Keith Jarrett’s “My Song,” Atkins’ guitar always exudes dignity. Encouragingly, several of the tunes that Atkins composed himself are the most interesting ones on the disc. “Laffin’ at Life” allows for some fingerpicking by the master and some OK doodling by other guitarists and keyboardists, and the smooth jazz “On a Roll” has other facets of the Atkins personality, with Earl Klugh apparently taking a guest solo. One of Atkins’ favorite latter-day collaborators, Mark Knopfler, is also on the record, to little discernable effect. Obviously, then, this is not one of the better Atkins Columbia discs. ― Allmusic