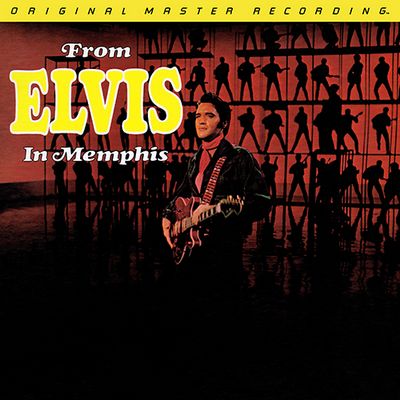 After a 14-year absence from Memphis, Elvis Presley returned to cut what was certainly his greatest album (or, at least, a tie effort with his RCA debut LP from early 1956). The fact that From Elvis in Memphis came out as well as it did is something of a surprise, in retrospect — Presley had a backlog of songs he genuinely liked that he wanted to record and had heard some newer soul material that also attracted him, and none of it resembled the material that he’d been cutting since his last non-soundtrack album , six years earlier. And he’d just come off of the NBC television special which, although a lot of work, had led him to the realization that he could be as exciting and vital a performer in 1969 as he’d been a dozen years before. And for what was practically the last time, the singer cut his manager, Tom Parker, out of the equation, turning himself over to producer Chips Moman. The result was one of the greatest white soul albums (and one of the greatest soul albums) ever cut, with brief but considerable forays into country, pop, and blues as well. Presley sounds rejuvenated artistically throughout the dozen cuts off the original album, and he’s supported by the best playing and backup singing of his entire recording history. ― by Allmusic