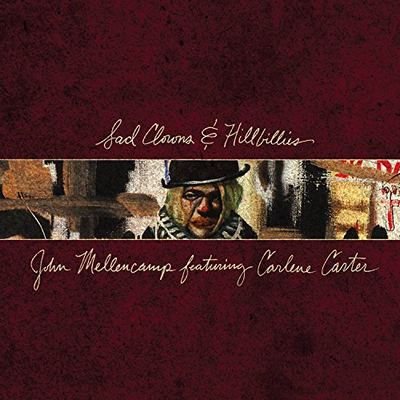 Sad Clowns & Hillbillies marks the first time in a decade that a John Mellencamp studio record finds him in the producer’s chair. It’s the first time ever that he’s shared billing on an album cover. Carlene Carter is a singer/songwriter and music biz veteran; the daughter of country music royalty — Carl Smith and June Carter Cash — making her the stepdaughter of Johnny. She and Mellencamp worked together on 2012’s Ghost Brothers of Darkland County, the musical theater project he scored for Stephen King; they collaborated further on the soundtrack for Ithaca — the “Sugar Hill Mountain” reprised here is one of a handful of excellent duets between them. Things don’t begin well, however. Mellencamp’s attempt at Mickey Newbury’s “Mobile Blue” (from his classic ‘Frisco Mabel Joy album) is utterly dull despite using a full band driven by Miriam Sturm’s excellent fiddling. “Battle of Angels” hearkens back to the songwriter’s Lonesome Jubilee/Big Daddy period, and works like a charm. It’s got everything: A killer hook, a poetic lyric, and a gritty vocal. Martina McBride appears as his duet partner on first single “Grandview,” a rocking paean to trailer parks — — though guest guitarist Izzy Stradlin almost steals the show with a greasy blues-rock shuffle and break. “Indigo Sunset,” the first duet between the headliners — is kicked off by Carter’s soulful country contralto. She frames the lyric’s haunted loneliness while Mellencamp’s grainy rasp — framed by B-3, mandolin, fiddle, and guitars — balances perfectly to bring it home. “All Night Talk Radio” is classic Mellencamp: Its dark vision is painted in compelling, ironic, and dark imagery packaged as in a taut, acoustic rocker. Morally, he should share the royalties for “You Are Blind” with Leonard Cohen’s estate: A careful listen reveals that the strategic manner of stacking images and metaphors to draw out the last syllables bears the unmistakable imprint of the late songwriter’s classic “Suzanne.” Carter’s soaring lead opening the duet of the rocking blues-gospel of “Damascus Road” is another set highlight. That theme also guides “My Soul’s Got Wings,” with Mellencamp’s melody and chart accompanying a Woody Guthrie lyric — Carter’s command of the country church vernacular (after all, she sang with her mom in the Carter Family) lights the fuse for Mellencamp — no stranger himself to rural Sunday services — and he brings it home. While the words in closer “An Easy Target” rank among Mellencamp’s most politically charged and socially arresting, his faux Tom Waits’ delivery blunts the tune’s impact a bit, but it’s too powerful to be completely buried under a stylistic mistake. While Sad Clowns & Hillbillies is a bit of a mixed bag, it’s better than all of his other records that bear that mark (Dance Naked, Whenever We Wanted, Rough Harvest, et. al). It puts all his strengths — excellent original songs, unforced arrangements, and (mostly) inspired performances — on full display. Well, almost. Because Carter’s dynamic presence here, and the pair’s unmistakable chemistry, lift this album above the ordinary. ― Allmusic