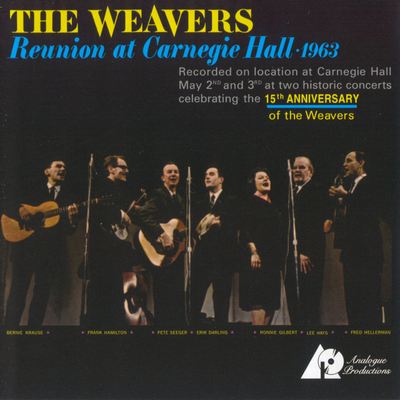 The Weavers celebrated their 15th anniversary by performing two concerts — May 2 and 3, 1963 — at Carnegie Hall, the site of their historic 1955 comeback concert, and invited back former members Pete Seeger and Erik Darling, as well as introducing new member Bernie Krause. The shows served to reaffirm the status of a group that had fostered the folk boom of the late ’50s and early ’60s, yet had been bypassed by it as others scored with their songs , notably Peter, Paul and Mary, who had taken the early Weavers song “If I Had a Hammer” into the Top Ten. The group reclaimed that song and others, such as “Wimoweh” (pilfered by the Tokens as “The Lion Sleeps Tonight”); performed their own old hits, such as “Goodnight, Irene,” and covered such new material as Tom Paxton’s “Ramblin’ Boy” (actually a solo performance by Seeger). On record, the numerous lead singers make the show sound more like a folk festival than a performance by one group, but this remains a spirited effort very much in tune with the first Carnegie Hall show. ― Allmusic