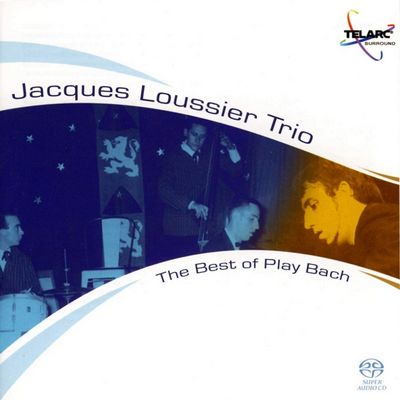 Jacques Loussier came up with his Play Bach jazz conceptions while still in the conservatory around 1950. He started recording them in 1959, and he’s been at it ever since, adapting other classical composers along the way, but always returning to Bach. It made sense then, and it makes sense now, for Bach’s linear, continuo-driven, contrapuntal style has always implied a swinging pulse; even some inspired, if strictly score-bound classical recordings of Bach sound as if they are poised for takeoff. These recordings are not the originals, though; they are remakes made in France in the mid-’90s (from Plays Bach and The Bach Book) and compiled by Telarc a decade later to coincide with Loussier’s 70th birthday year. No real surprises here; the repertory is mostly basic-repertoire Bach favorites, which Loussier alternates straight classical playing with straight-ahead, elegant, rhythm-shifting jazz elaborations for jazz piano trio. The main difference between the 1990s Loussier and his best-sellers from decades before is his willingness to occasionally update his adaptations with newer rhythms that didn’t exist then (check out the playfully funky Gavotte in D from the Orchestral Suite No. 3). Nevertheless, listeners are so used to hearing Bach peddled in so many different idioms and wardrobes that it is impossible to hear anything radical in this concept anymore — and certainly not since fellow pianist Uri Caine’s wacky, eclectic Goldberg Variations raised the bar for outrageously entertaining Bach adaptations in 2000. Nothing much to report about the surround mix — basically room ambience in the rear channels. But the piano has an appealingly robust, full-bodied timbre in SACD, more like that of a live instrument than on the original CDs, though the drums register more clearly on CD. This was released only as a hybrid SACD disc — Telarc’s first experiment with a single inventory title — so don’t go hunting for a stereo CD-only version; it doesn’t exist. ― Allmusic