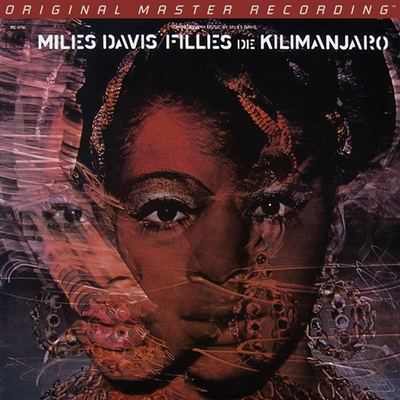 Since it’s billed as “Directions in Music by Miles Davis,” it should come as little surprise that Filles de Kilimanjaro is the beginning of a new phase for Miles, the place that he begins to dive headfirst into jazz-rock fusion. It also happens to be the swan song for his second classic quintet, arguably the finest collective of musicians he ever worked with, and what makes this album so fascinating is that it’s possible to hear the breaking point — though his quintet all followed him into fusion (three of his supporting players were on In a Silent Way), it’s possible to hear them all break with the conventional notions of what constituted even adventurous jazz, turning into something new. According to Miles, the change in “direction” was as much inspired by a desire to return to something earthy and bluesy as it was to find new musical territory, and Filles de Kilimanjaro bears him out. Though the album sports inexplicable, rather ridiculous French song titles, this is music that is unpretentiously adventurous, grounded in driving, mildly funky rhythms and bluesy growls from Miles, graced with weird, colorful flourishes from the band. Where Miles in the Sky meandered a bit, this is considerably more focused, even on the three songs that run over ten minutes, yet it still feels transitional. Not tentative (which In the Sky was), but certainly the music that would spring full bloom on In a Silent Way was still in the gestation phase, and despite the rock-blues-n-funk touches here, the music doesn’t fly and search the way that Nefertiti did. But that’s not a bad thing — this middle ground between the adventurous bop of the mid-’60s and the fusion of the late ’60s is rewarding in its own right, since it’s possible to hear great musicians find the foundation of a new form. For that alone, Filles de Kilimanjaro is necessary listening. ― Allmusic