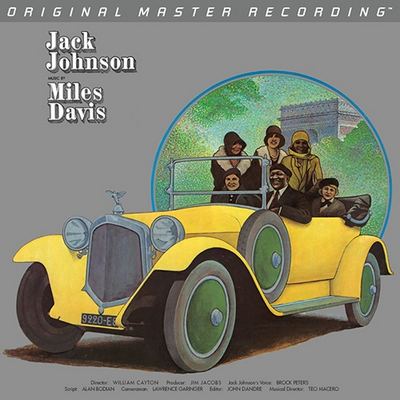 None of Miles Davis’ recordings has been more shrouded in mystery than Jack Johnson, yet none has better fulfilled Davis’ promise that he could form the “greatest rock band you ever heard.” Containing only two tracks, the album was assembled out of no less than four recording sessions between February 18, 1970 and June 4, 1970, and was patched together by producer Teo Macero. Most of the outtake material ended up on Directions, Big Fun, and elsewhere. The first misconception is the lineup: the credits on the recording are incomplete. For the opener, “Right Off,” the band is Davis, John McLaughlin, Billy Cobham, Herbie Hancock, Michael Henderson, and Steve Grossman (no piano player!), which reflects the liner notes. This was from the musicians’ point of view, in a single take, recorded as McLaughlin began riffing in the studio while waiting for Davis; it was picked up on by Henderson and Cobham, Hancock was ushered in to jump on a Hammond organ (he was passing through the building), and Davis rushed in at 2:19 and proceeded to play one of the longest, funkiest, knottiest, and most complex solos of his career. Seldom has he cut loose like that and played in the high register with such a full sound. In the meantime, the interplay between Cobham, McLaughlin, and Henderson is out of the box, McLaughlin playing long, angular chords centering around E. This was funky, dirty rock & roll jazz. The groove gets nastier and nastier as the track carries on and never quits, though there are insertions by Macero of two Davis takes on Sly Stone tunes and an ambient textured section before the band comes back with the groove, fires it up again, and carries it out. On “Yesternow,” the case is far more complex. There are two lineups, the one mentioned above, and one that begins at about 12:55. The second lineup was Davis, McLaughlin, Jack DeJohnette, Chick Corea, Bennie Maupin, Dave Holland, and Sonny Sharrock. The first 12 minutes of the tune revolve around a single bass riff lifted from James Brown’s “Say It Loud, I’m Black and I’m Proud.” The material that eases the first half of the tune into the second is taken from “Shhh/Peaceful,” from In a Silent Way, overdubbed with the same trumpet solo that is in the ambient section of “Right Off.” It gets more complex as the original lineup is dubbed back in with a section from Davis’ tune “Willie Nelson,” another part of the ambient section of “Right Off,” and an orchestral bit of “The Man Nobody Saw” at 23:52, before the voice of Jack Johnson (by actor Brock Peters) takes the piece out. The highly textured, nearly pastoral ambience at the end of the album is a fitting coda to the chilling, overall high-energy rockist stance of the album. Jack Johnson is the purest electric jazz record ever made because of the feeling of spontaneity and freedom it evokes in the listener, for the stellar and inspiring solos by McLaughlin and Davis that blur all edges between the two musics, and for the tireless perfection of the studio assemblage by Miles and producer Macero. ― Allmusic