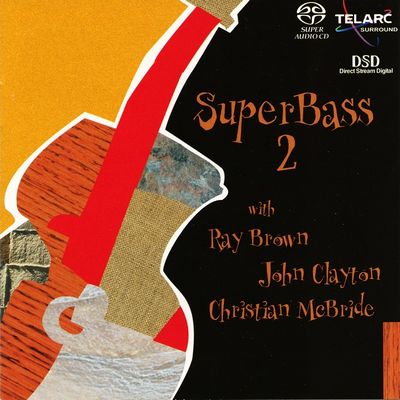 In the liner notes to the initial CD Super Bass (recorded for Capri), Ray Brown assured that the next Super Bass release would be twice as good. He lives up to the promise, as he and John Clayton are joined by the young bass sensation Christian McBride this time. Although Brown is the senior statesman of the trio and hatched the conception of Super Bass, all three men equally share the solos, as well as the arranging and choosing of songs. Brown’s contributions include a trio of imaginatively arranged, time-tested standards from Gershwin’s Porgy and Bess as well as the group’s lively signature theme and the campy “Taco With a Pork Chop” (which adds percussionists George Gludas and Larry Fuller). McBride’s chart of “Get Happy” is a delightful swinger, while his pulsating rendition of the Temptations’ “Papa Was a Rolling Stone” is a definite crowd pleaser that inspires the audience to sing along. Clayton’s very effective treatment of “Mysterioso” has the trio alternating between plucked and arco bass; his funky “Three by Four” also proves very infectious upon its first hearing. Brown’s comments in the midst of many of these performances gives the listener the feeling he or she is witnessing a private jam session between three old friends. ― Allmusic