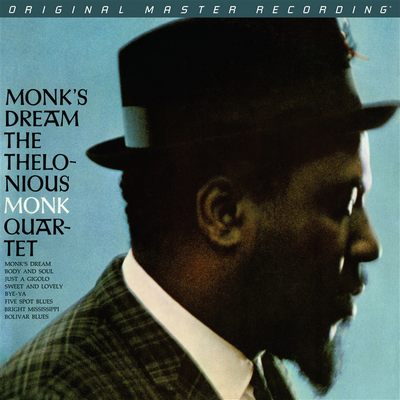 Monk’s Dream is the Columbia Records debut release featuring the Thelonious Monk Quartet: Monk (piano), Charlie Rouse (tenor sax), John Ore (bass), and Frankie Dunlop (drums). Jazz scholars and enthusiasts alike also heralded this combo as the best Monk had been involved with for several years. Although he would perform and record supported by various other musicians, the tight — almost telepathic — dimensions that these four shared has rarely been equalled in any genre. By the early ’60s, bop had become considered passé by artists as well as fans looking for the next musical trend. This is coupled with the fact that discerning Monk fans would have undoubtedly recognized many of these titles from several live recordings issued at the end of his tenure on Riverside. Not to belabor the point, however, but precious few musicians understood the layer upon layer of complexities and challenges that Monk’s music created. On tracks such as “Five Spot Blues” and “Bolivar Blues,” Rouse and Dunlop demonstrate their uncanny abilities by squeezing in well-placed instrumental fills, while never getting hit by the unpredictable rhythmic frisbees being tossed about by Monk. Augmenting the six quartet recordings are two solo sides: “Just a Gigolo” and “Body and Soul.” Most notable about Monk’s solo work is how much he retained the same extreme level of intuition throughout the nearly two decades that separate these recordings from his initial renderings in the late ’40s. Monk’s Dream is recommended, with something for every degree of Monk enthusiast. ― Allmusic