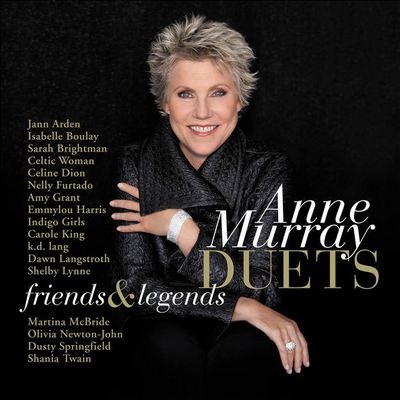 For her 34th studio album, Anne Murray recorded a set of duets with many of her favorite female singers, from Nelly Furtado to Sarah Brightman. There are a number of country duet partners here, such as Shania Twain, Emmylou Harris, and Martina McBride, but there are even more pop-oriented women singing with Murray, encompassing the likes of Celtic Woman and Celine Dion. This makes perfect sense, as Murray’s always straddled the pop-country fence effortlessly. Her singing on Duets: Friends and Legends is just as effortless. Now in her fifth decade as an active recording artist, her voice hasn’t lost a beat, sounding just as pure and clear as it did on 1970s “Snowbird” (done here with a surprisingly relaxed, easy vocal from Brightman, sounding for all the world like a young Olivia Newton-John). The majority of these songs are ones which have been sizeable hits for Murray in the past, most of which work nicely recast as duets, or at least showcases for harmony singing. There are exceptions, of course: sadly, the late Dusty Springfield’s voice doesn’t fit “I Just Fall in Love Again” at all, and Nelly Furtado sounds mightily out of place on “Daydream Believer.” But for each of those there’s an Emmylou Harris on “Another Pot o’ Tea,” k.d. lang matching Murray perfectly on “A Love Song,” and most of all, Shania Twain showing up with what might be the best vocal of her career on the classic “You Needed Me.” Murray clearly inspired most of her duet partners to bring their “A” games, and since she’s pretty much always on hers (and Phil Ramone, of all people, provides sterling production which knows when to stay out of the way), what results is often magical. ― Allmusic