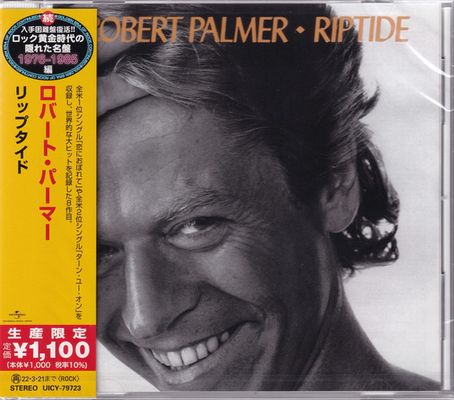 Coming on the heels of the massive success of the Power Station, Riptide packages Robert Palmer’s voice and suave personality into a commercial series of mostly rocking songs that seem custom-tailored to be chart hits. The Power Station connection threatens to overpower Palmer’s usually more eclectic musical interest, but with that band’s producer/member Bernard Edwards handling production duties and members Andy Taylor and Tony Thompson contributing as well, stylistic similarities were inevitable. “Flesh Wound,” though, sounds like a retread of “Some Like It Hot,” with its squelching staccato guitars and tribal drums mimicking the hit single. “Hyperactive” adds a bit of a pop veneer to the formula, with its bright keyboards dating the song to the Miami Vice era; that’s not to say it doesn’t hold nostalgic charm. “Addicted to Love” shares some of the same punch, somewhat slowing down the Power Station’s bombast into slinkier, blues territory, while maintaining a heavy rock crunch. The song skyrocketed to the top of the U.S. charts and sold more than a million copies as a single worldwide. A music video for the song, featuring sexy models gyrating blankly, no doubt helped sales and launched a new phase of Palmer’s career, where music videos would nearly overshadow his songwriting. Equally catchy and almost as successful is the brilliant take on the Jimmy Jam/Terry Lewis song “I Didn’t Mean to Turn You On.” It is perhaps Riptide’s most daring track, with its fractured jittery notes, funky basslines, and pounding drums matching Palmer’s bothered, sweaty vocals to create a yearning song that drips with passion. Also not to be missed is Earl King’s “Trick Bag,” which Palmer translates into a fun Clues-style minimalist modern blues song. Even if Riptide uses the Power Station as a blueprint, its only true faults reside in the cheesy album-opening and album-closing refrains of “Riptide,” which seemingly satisfy Palmer’s tropical proclivities. They might be relaxing and humorous as elevator music, but they are sharply at odds with the tone of the album and Palmer’s usually impeccable musical taste. Cheesy opening and ending aside, Riptide has some truly addictive moments and it set him firmly on course, for better or worse, for the even harder-rocking Heavy Nova. ― by Allmusic