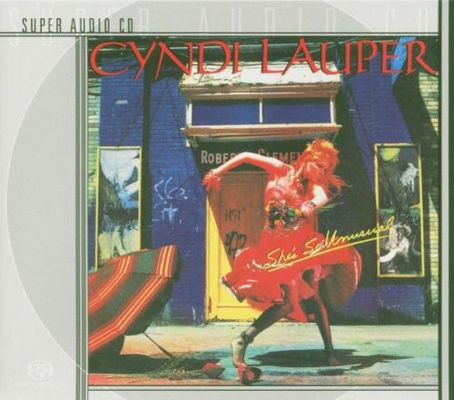 One of the great new wave/early MTV records, She’s So Unusual is a giddy mix of self-confidence, effervescent popcraft, unabashed sentimentality, subversiveness, and clever humor. In short, it’s a multifaceted portrait of a multifaceted talent, an artist that’s far more clever than her thin, deliberately girly voice would indicate. Then again, Lauper’s voice suits her musical persona, since its chirpiness adds depth, or reconfigures the songs, whether it’s the call to arms of “Girls Just Want to Have Fun” or the tearjerking “Time After Time.” Lauper is at her very best on the first side, all of which were singles or received airplay, and this collection of songs — “Money Changes Everything,” “Girls,” “When You Were Mine,” “Time,” “She Bop,” “All Through the Night” — is astonishing in its consistency, so strong that it makes the remaining tracks — all enjoyable, but rather pedestrian — charming by their association with songs so brilliantly alive. If Lauper couldn’t maintain this level of consistency, it’s because this captured her persona better than anyone could imagine — when a debut captures a personality so well, let alone a personality so tied to its time, the successive work can’t help but pale in comparison. Still, when it’s captured as brightly and brilliantly as it is here, it does result in a debut that retains its potency, long after its production seems a little dated. ― by Allmusic