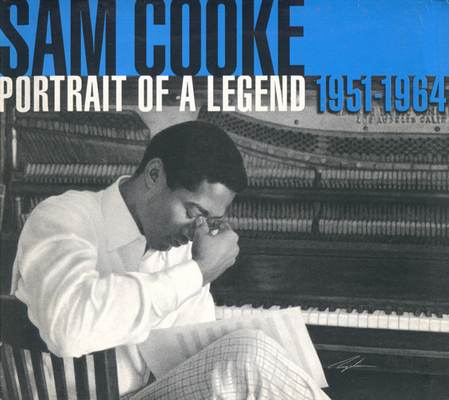 Some 46 years after his first pop hit, and 39 years after his death, comes only the second attempt at a comprehensive Sam Cooke collection. Portrait of a Legend 1951-1964 eclipses RCA’s early-’80s The Man and His Music, going it better in running time but losing some important recordings — “That’s Heaven to Me” and “Soothe Me,” arguably one of Cooke’s most important songs — in the process of summing up his career. From 1951’s Soul Stirrers’ gospel classic “Touch the Hem of His Garment” through to 1964’s “A Change Is Gonna Come” and “Shake,” we get highlights of Cooke’s career presented in state-of-the-art digital audio; superior in every way possible to the audio quality of The Man and His Music. What’s more, this is a hybrid disc with SACD capability, and the sound on that layer is almost as much of a jump above the quality on the CD layer as this remastering is from the old The Man and His Music disc; and either the standard CD or the SACD playback makes that 1980s-issued compilation sound faint and anemic. There’s also annotation here — which was totally lacking on the earlier CD — by Peter Guralnick, which delves very effectively into the background of each song. And the producers have taken the trouble to be a little inventive in the programming — it would have been easy enough to follow a strict chronological approach, but instead the disc opens and closes with tracks that reveal Cooke’s gospel roots, which is pretty much where his music started and where it ended up, bookending his first hit with songs from his first session ever. ― Allmusic