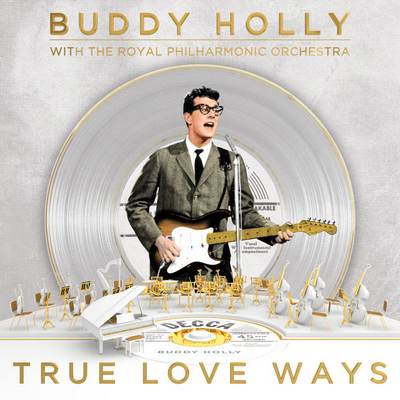 Due for release on 16th November 2018, the newly recorded album – which features Buddy Holly’s utterly distinctive original vocals and guitar playing set to exquisite arrangements performed by the Royal Philharmonic Orchestra – is the poignant realisation of a dream Holly first explored just four months before his tragic death in a plane crash at the age of 22. In that last recording session, at the Decca Studios in New York, the star was joined by an 18 piece orchestra, fronted by Dick Jacobs, the man bringing strings to rock and roll. They recorded four tracks: ‘True love Ways’, ‘Raining in My Heart’, ‘Moondreams’ and ‘It Doesn’t Matter Anymore’ all of which are soaked in strings, clearly demonstrating a new direction for Buddy.

Recorded in London’s Angel Studios, and produced by Nick Patrick, the man behind the hugely successful Elvis Presley and Roy Orbison orchestral albums, ‘True Love Ways’ truly reflects Buddy Holly’s love for strings, having learnt to play the violin as a child and continued all his life. Beloved tracks the singer recorded with The Crickets such as ‘Everyday’, ‘Peggy Sue’ (whose namesake passed away earlier this month) and ‘That’ll Be The Day’ are all included, with orchestrations that invigorate, rather than overwhelm, the rock and roll of which Holly was king. ― Amazon