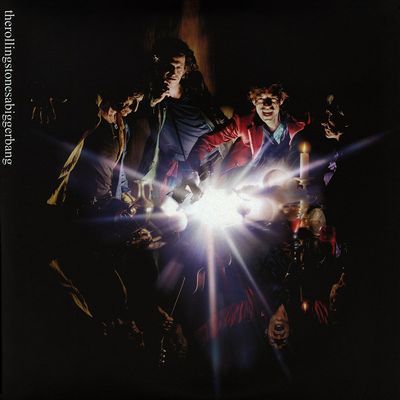 Eight years separate 2005’s A Bigger Bang, the Rolling Stones’ 24th album of original material, from its 1997 predecessor, Bridges to Babylon, the longest stretch of time between Stones albums in history, but unlike the three-year gap between 1986’s Dirty Work and 1989’s Steel Wheels, the band never really went away. They toured steadily, not just behind Bridges but behind the career-spanning 2002 compilation Forty Licks, and the steady activity paid off nicely, as the 2004 concert souvenir album Live Licks proved. The tight, sleek, muscular band showcased there was a surprise — they played with a strength and swagger they hadn’t had in years — but a bigger surprise is that A Bigger Bang finds that reinvigorated band carrying its latter-day renaissance into the studio, turning in a sinewy, confident, satisfying album that’s the band’s best in years. Of course, every Stones album since their highly touted, self-conscious 1989 comeback, Steel Wheels, has been designed to get this kind of positive press, to get reviewers to haul out the cliché that this is their “best record since Exile on Main St.” (Mick Jagger is so conscious of this, he deliberately compared Bigger Bang to Exile in all pre-release publicity and press, even if the scope and feel of Bang is very different from that 1972 classic), so it’s hard not to take any praise with a grain of salt, but there is a big difference between this album and 1994’s Voodoo Lounge. That album was deliberately classicist, touching on all of the signatures of classic mid-period, late-’60s/early-’70s Stones — reviving the folk, country, and straight blues that balanced their trademark rockers — and while it was often successful, it very much sounded like the Stones trying to be the Stones. What distinguishes A Bigger Bang is that it captures the Stones simply being the Stones, playing without guest stars, not trying to have a hit, not trying to adopt the production style of the day, not doing anything but lying back and playing. ― Allmusic