Two years in the making, Santana IV marks the reunion of nearly all members of the 1971-1972 band, arguably its greatest lineup. Carlos Santana, conguero Michael Carabello, organist/lead vocalist Gregg Rolie, drummer Michael Shrieve, and guitarist Neal Schon cut the landmark Santana III in 1971. It was a short-lived group as Schon and Rolie would depart in early 1973 to form Journey. Filling out the lineup are Carlos’ longtime bassist Benny Rietveld and second percussionist Karl Perazza. Unlike the reunions of most classic rockers, this one proves its musical mettle, even when the album gives in to excess. The interplay between the guitarists is fiery, while Rolie and Shrieve have never been less than inspiring. The former is a far better (more expressive) vocalist than he was in his youth.

This output runs the stylistic gamut without compromising Santana’s core sound. Opener “Yambu” is a cooking meld of cumbia, funk, and hard rock. The screaming blues-rock of “Shake It” is the first — but not only — place where Peter Green’s Fleetwood Mac is referenced, albeit with percolating Afro-Cuban grooves and salsa chants. In “Blues Magic,” they reference Mac again in a slow, brooding two-chord blues vamp. It would have made a perfect B-side for “Black Magic Woman.” First single “Anywhere You Want to Go” recalls the strutting, swelling toughness of III and Abraxas. “Fillmore East” commences with a silvery nocturnal feel, then evolves into a seven-minute instrumental jam that lets the front line players stretch out. Schon, always a rock technician, makes Carlos work harder than he has in years. “Love Makes the World Go Round” and “Freedom Is in Your Mind” are changes of pace with Ronald Isley on vocals. The former is an R&B-inspired rock jam with cooking percussive layers; the latter a scorching meld of raucous funk and jazz-rock with Yoruban polyrhythms. The instrumental ballad “Sueños” revisits the feel of “Samba Pa Ti,” while “Echizo” touches on the transcendent tropical, melodic jazz fusion of “Song of the Wind” as both guitarists soar. The album should have ended with “Come as You Are,” a celebratory, tropically inspired rocker, but closes instead with “Forgiveness,” a beautiful but long, slow blues that should have been sequenced earlier in the mix.

At over 75 minutes, Santana IV would have benefitted greatly from judicious editing. There is filler here: the classic rock-styled blues raveup in “Choo Choo,” the horn-drenched boogie of “Caiminando,” the tired, Shaman-esque “Leave Me Alone,” and the new agey, smooth jazz-blues fusion of “Leave Me Alone,” all feel like they are ideas rather than finished songs. Flaws aside, IV is quite enjoyable — especially split over a couple of listens. There remains a real musical connection and shared joy between these players. They may not sound young, radical, or reckless, but they do come off as if they never stopped playing and discovering together. ― Allmusic 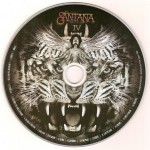