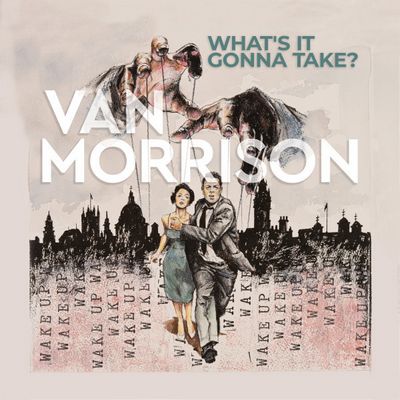 Arriving hot on the heels of Latest Record Project, Vol. 1, the 2021 double album where Van Morrison unleashed all of his frustrations at being locked down during the COVID-19 pandemic, What’s It Gonna Take? finds the singer doubling down on all of his gripes. The shift in intensity is apparent from the artwork depicting a couple being controlled by the hand of an unseen puppet master, an image that crystallizes Morrison’s belief that the government and other shadowy forces are conspiring to take away free will from the common man. Van believes himself to be among these little folks: as he sings on one of the record’s less politically charged songs, “I Ain’t No Celebrity,” he’s merely a working musician. The fact that he was not able to work during the early months of the pandemic stoked Morrison’s anger, and it shines brightly throughout What’s It Gonna Take?, seeming even more vivid because his vitriolic lyrics are married to jaunty R&B rhythms or slow, soulful grooves delivered with precision and enshrined in a clean production. There’s no ignoring Morrison’s repeated references to Bill Gates, Mark Zuckerberg, fake news, and mind control or his huffy denials that he’s a conspiracy theorist as they’re pushed right to the forefront. Plus, where he seemed merely cranky on Latest Record Project, Vol. 1, Morrison is filled with bile here, letting it bubble to the surface even on slow-burners like “Can’t Go On This Way.” By the end of the album, he points some of this anger inward, resulting in the relatively nuanced “Fear and Self-Loathing in Las Vegas” and “Pretending,” but that doesn’t change the general tenor of What’s It Gonna Take? The blend of anodyne R&B and anger makes for one of the odder albums in Van Morrison’s body of work. ― Allmusic