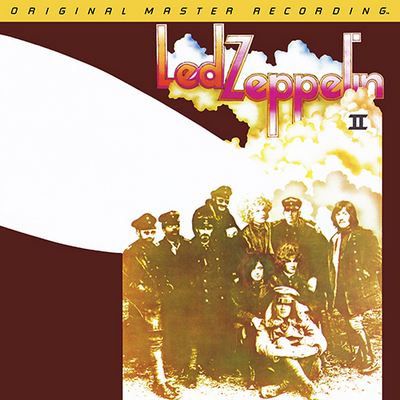 Recorded quickly during Led Zeppelin’s first American tours, Led Zeppelin II provided the blueprint for all the heavy metal bands that followed it. Since the group could only enter the studio for brief amounts of time, most of the songs that compose II are reworked blues and rock & roll standards that the band was performing on-stage at the time. Not only did the short amount of time result in a lack of original material, it made the sound more direct. Jimmy Page still provided layers of guitar overdubs, but the overall sound of the album is heavy and hard, brutal and direct. “Whole Lotta Love,” “The Lemon Song,” and “Bring It on Home” are all based on classic blues songs — only, the riffs are simpler and louder and each song has an extended section for instrumental solos. Of the remaining six songs, two sport light acoustic touches (“Thank You,” “Ramble On”), but the other four are straight-ahead heavy rock that follows the formula of the revamped blues songs. While Led Zeppelin II doesn’t have the eclecticism of the group’s debut, it’s arguably more influential. After all, nearly every one of the hundreds of Zeppelin imitators used this record, with its lack of dynamics and its pummeling riffs, as a blueprint. ― Allmusic