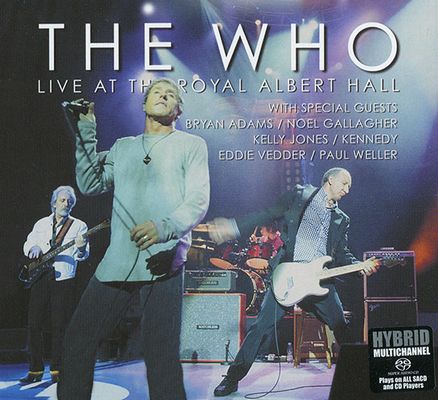 The Who’s Live at the Royal Albert Hall captures a charity concert for a cancer organization the reunited group performed in November of 2000. Given the band’s spotty track record in their farewell tours and reunions of the ’80s and ’90s, it’s easy for some longtime fans to be skeptical of the musical merits of the triple-disc hybrid SACD release of this concert, but this is an exceptional reunion concert, finding the band at their strongest since their early-’80s breakup. Supported by drummer Zak Starkey and longtime keyboardist John “Rabbit” Bundrick, Pete Townshend, Roger Daltrey, and John Entwistle (in one of his last major concerts) sound reinvigorated, playing such standards as “I Can’t Explain” and “Anyway, Anyhow, Anywhere” with vigor and energy, as if they haven’t played them countless times. The group also stretches out, as Townshend contributes a new bridge to “The Kids Are Alright” and the band jams through “Magic Bus,” “5:15,” and “Won’t Get Fooled Again,” showing both dexterity and muscle. While nobody would mistake this show with the careening power and unpredictability of the band at their peak in the ’60s and ’70s, this is an impressive mix of maturity, professionalism, and passion, finding the group regaining their sense of authority and integrity — compare this to such rote reunions as Join Together to hear the difference. At three discs (including four bonus tracks recorded at another Royal Albert Hall show in February 2002), this is a bit long, but for those longtime fans, there’s plenty to like here. After all, it’s very rare for a reunion album to be this good, and it’s even rarer to have one with cameos as good as those here — Townshend’s duet with Paul Weller on “So Sad About Us” and two songs fronted by Pearl Jam’s Eddie Vedder (“I’m One,” “Getting in Tune”) are as good as those songs by Daltrey, and help make Live at the Royal Albert Hall a really pleasant surprise. ― Allmusic