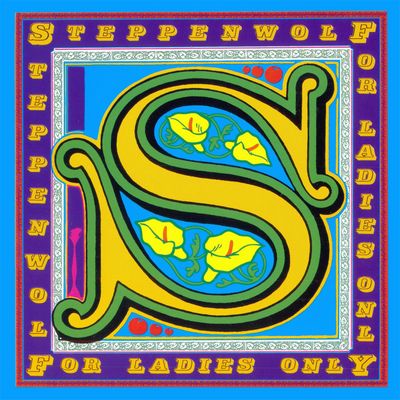 The title track of For Ladies Only is a classic slice of Steppenwolf’s brand of hard rock: gritty chord guitar from Blues Image refugee Kent Henry (Steppenwolf went through as many or more guitarist changes as the Guess Who), elegant piano from Goldy McJohn, even jazz flavors on a nine-minute-plus track as blatantly sexist as the album gatefold. The graphic photo of a huge penis car alongside the Hollywood walk of fame tucked inside the cardboard is completely juvenile, while the back of the LP features the boys all reading books, from The Sensuous Woman to Snow White & the Seven Dwarves — interesting imagery that doesn’t complement the music as much as the artists might have thought it did at the time. The Jerry Edmonton/Goldy McJohn composition “I’m Asking” has a heavy “Jumpin’ Jack Flash” riff that’s all sludged out and a weak non-John Kay vocal — like, why bother? Kay’s snarling voice was as much a part of the sound as the heavy keys, and without it the otherwise fine performance and production are just totally eradicated; it’s a song that would’ve worked better as an instrumental. Ditto for Jerry Edmonton’s “Jaded Strumpet,” which is also in desperate need of Kay’s authoritative tone, which is refreshingly surreal on the singer’s co-write with George Biondo that is “Sparkle Eyes.”

In retrospect, For Ladies Only remains a neat artifact of a band who might’ve been called on to create too much too soon. Three Mars Bonfire compositions brighten up the proceedings, including “Tenderness” and the excellent “Ride With Me,” perhaps the most memorable tune of the ten, all culled from that ever-flowing fountain that was Mars Bonfire’s Faster Than the Speed of Life LP. Interesting that on the vinyl four songs grace side one, while side two has six titles, from two to four and a half minutes in length. The songwriting is shared pretty equally, the bandmembers co-writing in different combinations. Bonfire’s brother, Jerry Edmonton; singer John Kay; and keyboardist Goldy McJohn all write or contribute to three titles each with two for the newer members, bassist George Biondo and guitarist Kent Henry.

A very democratic brew, which is interesting but for the most part doesn’t have the punch of the title track or the nugget from the Mars Bonfire solo disc, “Ride With Me.” The original Sparrow guitarist’s presence casts a good shadow and remains as essential to this crew as the lead singer and keyboard player. Why they didn’t keep Bonfire on from day one of their journey is the mystery. This 1971 Dunhill release produced by Richard Podolor for Steppenwolf Productions, Inc. makes that point loud and clear, though the Kent Henry/Goldy McJohn instrumental “Black Pit” does tend to sound like Blues Image-meets-Steppenwolf, and proves the point made earlier. If John Kay wasn’t in the mood to sing, the material works better with no voice at all. His absence from three of the ten tracks is perhaps an indication that he had his sights set on a solo career. Kent Henry and George Biondo moved on with the singer for his 1972 outing Forgotten Songs & Unsung Heroes. ― Allmusic