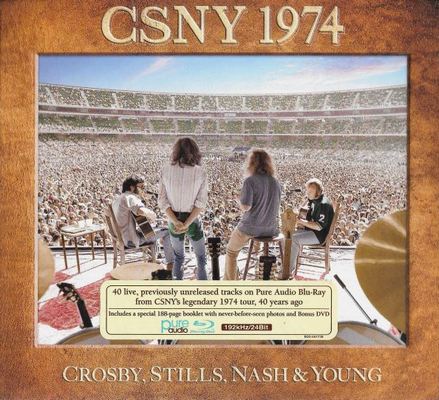 It was, at the time, one of the highest-grossing rock tours ever, grossing over 11 million dollars in an era when such figures were uncommon. Such success camouflaged the chaos behind the scenes — the bitter fights and feuds, the excess and indulgence that led to Crosby, Stills, Nash & Young pocketing about a half million dollars each, when all was said and done. Big bucks were the reason the CSNY 1974 tour even existed. Efforts to record a new album in 1973, their first since 1970’s breakthrough Déjà Vu, collapsed but manager Elliot Roberts and promoter Bill Graham convinced the group to stage the first outdoor stadium tour in the summer of 1974, with the idea that CSNY would test-drive new material in concert, then record a new studio album in the fall, or maybe release a live record from the historic tour. Neither happened. The group cleaved in two upon the tour’s conclusion and the live tapes sat in the vaults until Graham Nash decided to assemble a box set of the tour just in time for its 40th anniversary in 2014. Nash and producer Joel Bernstein — the driving forces behind the excellent new millennial archival CSN reissues — culled the best moments from the nine recorded shows, sometimes cobbling together composites, then assembled the whole thing as a three-CD set designed to replicate the mammoth three-hour sets the quartet played in 1974. That very length indicates how there was room on the 1974 tour for every aspect of CSNY, giving space to sensitive folk, woolly electric guitar jams, hits, and unheard songs. Several of those new songs showed up on albums by CSNY in various permutations, while a few — mostly written by Young — never got an airing outside of this tour, so the first official release of “Love Art Blues,” “Pushed It Over the End,” and even the throwaway Nixon jape “Goodbye Dick” is indeed noteworthy. But what makes CSNY 1974 a substantial chapter in their legacy is how it captures the band in full flight just as its moment is starting to slip away. Stills and Young play with the burly force they channeled into Manassas and Crazy Horse, providing a startling contrast to both the sweetness of disc two’s acoustic set and Crosby’s excursions into the haze of If I Could Only Remember My Name. Hearing the band pull apart as its members come together is simultaneously thrilling and enervating because Crosby, Stills, Nash, and Young remain locked in a battle to outdo one another; it’s fascinating to hear them spar, but also draining. Nevertheless, that messy competition is why CSNY 1974 is a vital addition to their canon. Tales of CSNY acrimony are legend, but this rancor rarely surfaced on record. Here, those brawling egos are pushed to the forefront, with all the pretty harmonies operating as an accent to the main event. ― Allmusic