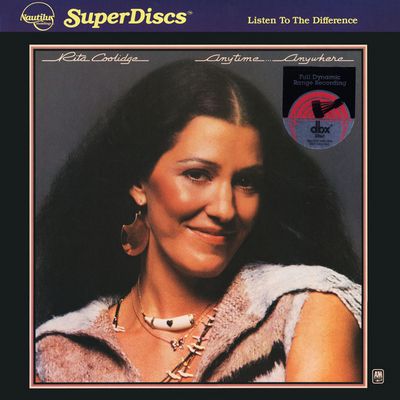 Fans aware of Rita Coolidge’s past credentials might have been expecting, or at least hoping, for something more soulful than Anytime…Anywhere, given her achievements as backing singer for Joe Cocker, Eric Clapton, Stephen Stills, and Kris Kristofferson. Still, the record had something going for it commercially that her past records lacked, which was being totally in tune with what the soft rock audience wanted in the late ’70s. Her ability to round off the edges of soul classics put her remake of Jackie Wilson’s “(Your Love Has Lifted Me) Higher and Higher” at number two in the pop charts, and helped lift this album — which included another, smaller hit soul remake with “The Way You Do the Things You Do” — into the Top Ten. Those two songs, as well as a Top Ten single cover of Boz Scaggs’ “We’re All Alone,” were all on this LP, which presents something like a milder variation of Linda Ronstadt’s ability to interpret songs by a variety of pop and soul songwriters. Also on board were the Bee Gees’ “Words,” Sam Cooke’s “Good Times,” Kristofferson’s “Who’s to Bless and Who’s to Blame,” and Crazy Horse guitarist Danny Whitten’s “I Don’t Want to Talk About It,” while Booker T. Jones’ presence helped give the record some genuine R&B feeling. While there was also the feeling that Coolidge wasn’t belting it out to the earthiest extent of her capabilities, the slickness of the production combined with her easy-on-the-ear vocals to yield an album that got an enormous amount of radio airplay, and was by far the highest-selling effort of her career. ― Allmusic