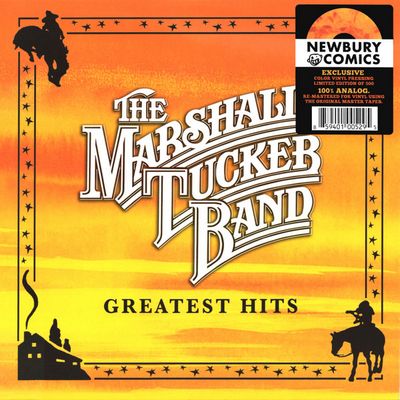 For those who purchased the original CD version of the Marshal Tucker Band’s Greatest Hits compilation — taken directly from the Capricorn LP version and distributed by K-Tel — be aware that this 21st century Shout Factory version is a very different, more authoritative, and satisfying document. This version of Greatest Hits contains 14 tracks compared to the original’s eight. It contains the actual single versions of “Heard It in a Love Song,” “Searchin’ for a Rainbow,” “Long Hard Ride,” “Can’t You See,” and “This ‘Ol Cowboy.” Instead of following a strict chronological line, producer Ron Rainey assembles these tracks in a manner that makes for an ultimate MTB playlist. Along with the singles, it contains select top-notch album cuts including “In My Own Way” (with a guest spot by Charlie Daniels on fiddle) the blues “Too Stubborn,” “Desert Skies,” and “I Should Never Have Started Lovin’ You,” from Carolina Dreams, the latter showcasing the sheer versatility of the band with its jazz overtones. It contains only cuts recorded by the original sextet of Doug Gray, brothers Toy and Tommy Caldwell, George McCorkle, Paul Riddle, and Jerry Eubanks between 1973 and 1977 (all Capricorn, no Warner). In addition to a stellar track selection, the sound has been brilliantly remastered by Buddy Strong and Gray. Hearing “Fire on the Mountain,” “Ramblin’,” “24 Hours at a Time,” and “Take the Highway” in this context reveals MTB not so much as a “Southern Rock Band” with all the excesses and cliches that implies, but as a highly skilled, very ambitious group of musicians who were influenced by everything from country and blues to jazz, pop, and even soul. For hardcore fans, more than likely there isn’t anything here you don’t already have, but for anyone curious or looking for a truly representative single-disc compilation, this one is head and shoulders above anything else out there. ― Allmusic