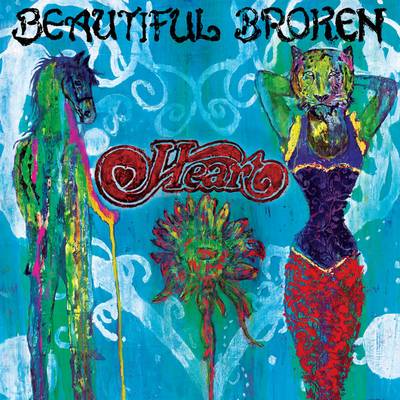 On Beautiful Broken, Heart decide to tread a path well worn by vintage rockers: revisiting their catalog. This is an exercise often fraught with peril. That said, while Ann and Nancy Wilson do stumble, they’ve learned from predecessors’ mistakes. Seven of these ten cuts were previously recorded, but none are considered Heart standards. Thankfully, they left the classics alone. The three new songs are uniformly excellent additions to the catalog. Co-produced by Nancy Wilson and bassist Dan Rothchild, the set kicks off with the rocking title track single, which was included as a bonus track on 2012’s Fanatic. Metallica’s James Hetfield adds his gruff baritone and some new lyrics too. The riff is classic Heart and the juxtaposition of Ann’s clear, soaring alto with Hetfield’s throaty roar works. “Two” is a cover of a new Ne-Yo song. Sung by Nancy (in inspired voice) with Ann backing, its first half is fueled by piano and a B-3, before a Moog bassline, synth strings, and electric guitars build it into a midtempo rocker. Ann’s “Sweet Darlin'” (from Bebe le Strange) features an enormous string chart by Paul Buckmaster inspired by the sessions he did with Elton John in the early ’70s. Her voice rises above the swelling violins, violas, cellos, piano, and drums. “I Jump,” another new tune, also gets the orchestral treatment, but the counterpoint between strings and dissonant, Led Zeppelin-esque riffing in the refrain cleverly offsets the sweetness in the verses. This set marks the first time that “Heaven” has appeared on a studio album. Opening with a bowed acoustic guitar that sounds like a sarod, it’s a meld of new age, folk, and East Indian open-tuned drone throughout the intro. When the drums and electric slide guitars wind in and Ann Wilson lets her thunderous voice out of the gate, it’s plodding stadium rock greatness. “Down on Me,” from Bebe le Strange, was originally a scorching, theatrical blues-rocker. It’s been slowed here with a syncopated backbeat. The blues feel remains but is tempered by a fine soul tinge in Ann’s delivery. Some tracks just don’t work: the new version of “City’s Burning” has been slowed and funked up, but schmaltzy strings water down the backbone riff. “Johnny Moon” and “Language of Love” are messy, unfocused “kitchen sink” approaches that can’t decide what they want to be. Beautiful Broken could have used more uptempo tracks to balance out the ballads; they would have added dimension to an intriguing album. This is obviously not meant to attract new fans, but one to re-engage longstanding ones. It’s a mixed bag, but its experimentation works more often than not, while the new songs suggest Heart’s creativity is undiminished. ― Allmusic