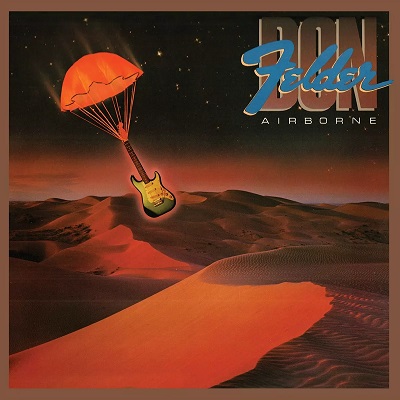 1983’s Airborne by Eagles guitarist Don Felder is truly style over substance. For a member of such a phenomenally successful and visible group to release something so nondescript is really food for thought. Felder produced this effort, and he has friends galore pack the proceedings with lots of musicianship, the late Carlos Vega is on drums, as are Joe Vitale, Russ Kunkel, and Tris Imboden; fellow latter-day Eagle Timothy B. Schmit provides backing vocals, and there are appearances by Jeff Lorber , Joe Lala, Kenny Loggins, Dave Mason, and Albhy Galuten, but those talents aren’t enough to pull this one out of the bargain bins. With a mega-producer like Galuten contributing, one would think it prudent to invite him onboard to co-produce: His magic is part of what is missing here. The record sounds like “The Heat Is On,” Glenn Frey’s very ’80s-sounding 1984 hit from Beverly Hills Cop, and years later that sound does not hold these songs up to the test of time. For the guy who co-wrote only one major Eagles title of note, “Hotel California,” this album of Felder originals just goes right through the listener. Kenny Loggins co-writes “Never Surrender” with the guitarist, but it just isn’t enough, melodies like the ones on “Who Tonight” show little creativity, and the transparent production gives those black-and-white numbers very little sparkle. “Who Tonight” has some of the feel of Danny Kirwan and Bob Welch’s post-Fleetwood Mac solo work, and had they guest starred on lead vocals, it would have made a world of difference. Also, some outside material or even a long instrumental version of “Hotel California” would have given this collection something to hold onto. “Never Surrender” could be “Life in the Fast Lane” redux with none of its memorable qualities. As a vocalist, he doesn’t have dynamic range and seems to emulate Joe Walsh without the charm. The vocals on “Winners” are downright annoying, while “Haywire”‘s decent hook gets lost in the translation; it might have been a better track for another artist. Airborne plays like an album that was given to the artist out of respect for his work in the trenches rather than because he had something worthwhile to say. ― Allmusic