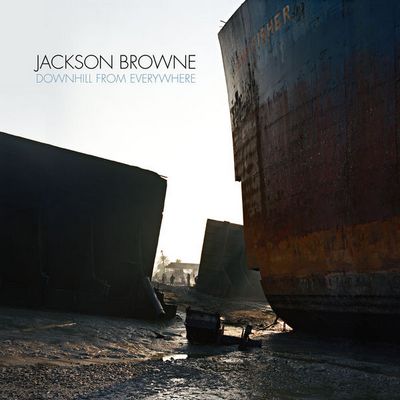 Jackson Browne albums don’t come around all that often anymore. During his prolific years in the 1970s and ’80s, he had plenty to say and said it with the sensitivity and poetic candor that is his stock-in-trade. Released in July 2021, Downhill from Everywhere is Browne’s fourth studio album since the turn of the millennium, and it’s a pretty good one. One of the defining voices of the boomer generation, he epitomized the laid-back singer/songwriter sound of the West Coast and in that respect, little has changed. At 72, Browne’s musical legacy remains undiminished and if Downhill isn’t a particularly radical entry in his catalog, it has the heart, craft, and veteran presence of an artist who has little to prove, but still a bit more to say. Warmly arranged in the lean manner of his best ’70s work, the ten-song set is a delight of tasteful guitar work, folk-rock charm, and perceptive lyrics befitting the singer’s current position on the timeline. Among the reflections on mortality (the wistful “Still Looking for Something”) and late-in-life romance (“Minutes to Downtown”) are more topical concerns like the environment (the title track’s punchy anti-pollution plea) and immigration (the poignant “The Dreamer”). In this way, Downhill adheres to Browne’s late-period album template of presenting a fairly even balance of the personal and political. Captaining the expected band of L.A. studio stalwarts with easy grace, it’s an album full of strong performances, few missteps, and the weary charisma that has been one of the singer’s hallmarks. A half-century into his career, that timeless feeling that signified even Browne’s earliest releases is still present, if ever-so-slightly more shopworn by time’s passing. ― by Allmusic