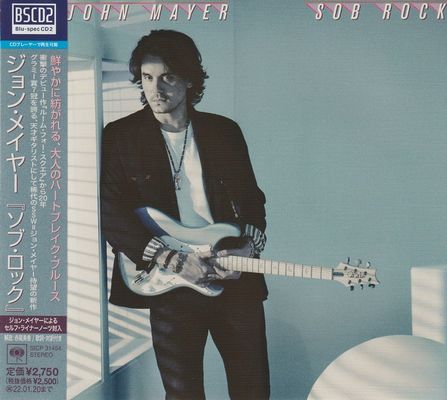 John Mayer evokes the hushed professionalism of ’80s adult-contemporary rock on his all-too-breezy eighth studio album, 2021’s Sob Rock. Mayer has always worn his influences on his sleeve, often bringing together the bluesy fret work of Eric Clapton with the yearning singer/songwriter sincerity of James Taylor. He’s also made no secret of how much the sound of mid- and late-’80s pop/rock has informed his own work, and albums like 2006’s Grammy-winning Continuum and 2012’s Born and Raised have found him drawing upon the work of icons like Sting, Peter Gabriel, and Neil Young. Once again working with legendary producer Don Was (who helmed Born and Raised), Mayer has crafted an album that purposefully sounds like it could have been released anytime between 1985 and 1990. It’s a gauzy, teal-toned throwback aesthetic that Mayer extends to the album’s visuals, including a dusky blue LP cover photo (some released replete with vintage-appropriate “The Nice Price” sticker in bubbly Cooper font). Given the warm, analog-sounding synths of “The Last Train Home” and the Fleetwood Mac-isms of “New Light,” one could easily listen to Sob Rock and imagine Mayer showing up at Live Aid 1985 to sit in with Dire Straits or Phil Collins. That said, for better or worse, the title of Sob Rock speaks as much to the album’s aesthetics as it does the thematic material. Where Mayer’s ’80s forebears tackled issues like apartheid, nuclear disarmament, and ending world hunger, Sob Rock finds Mayer stuck in a pattern of self-absorbed, lovelorn sadness. As he sings on “New Light,” I’m the boy in your other phone/Lighting up inside your drawer at home all alone/Pushing 40 in the friend zone.” It’s this kind of candid specificity of emotion that makes Sob Rock both a relatable and at times frustrating experience. There are several standout tracks here, including the aforementioned “The Last Train Home” and the Bruce Hornsby-esque “Shot in the Dark” that stick in your head in the way that the best of Mayer’s work often does. The smooth production also leans nicely towards his Continuum sound and feels like a more natural fit than his earnest forays into folk and country on Paradise Valley. However, much of the album feels indistinct and weightless, with one failed-relationship song after another delivered in such a low-key way that they drift by without leaving much of a trace. Others, like “Why You No Love Me,” with its childlike title, border on irksome as they too expertly mimic the sound of something you might have heard on Jimmy Buffett’s 1987 A Pirate Looks at Forty Tour. Sob Rock is a pleasant album whose thematic ’80s affections add some stylistic flair to Mayer’s laid-back songs. ― by Allmusic