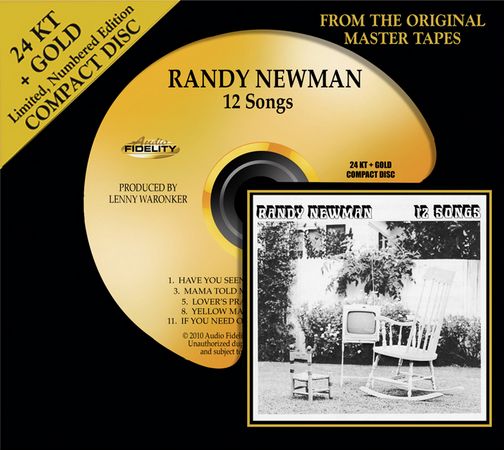 On his debut album, Randy Newman sounded as if he was still getting used to the notion of performing his own songs in the studio (despite years of cutting songwriting demos), but apparently he was a pretty quick study, and his second long-player, 12 Songs, was a striking step forward for Newman as a recording artist. While much of Randy Newman was heavily orchestrated, 12 Songs was cut with a small combo (Ry Cooder and Clarence White take turns on guitar), leaving a lot more room for Newman’s Fats Domino-gone-cynical piano and the bluesier side of his vocal style, and Randy sounds far more confident and comfortable in this context. And Newman’s second batch of songs were even stronger than his first (no small accomplishment), rocking more and grooving harder but losing none of their intelligence and careful craft in the process. “Have You Seen My Baby?” and “Mama Told Me Not to Come” are a pair of sly, updated New Orleans-style rockers (both of which would be much-covered in the coming years); “Let’s Burn Down the Cornfield” and “Suzanne” are subtly ominous tales of love and sex; “Yellow Man” was an early meditation on one of Newman’s favorite themes, the absurdity of racial prejudice (which he would also glance at in his straight-but-twisted cover of “Underneath the Harlem Moon”); and “My Old Kentucky Home” is a hilarious and quite uncharitable look at life in the deep South (another theme that would pop up in his later work). Newman’s humor started getting more acidic with 12 Songs, but here even his most mordant character studies boast a recognizable humanity, which often make his subjects both pitiable and all the more loathsome. Superb material brilliantly executed, 12 Songs was Randy Newman’s first great album, and is still one of his finest moments on record. ― Allmusic