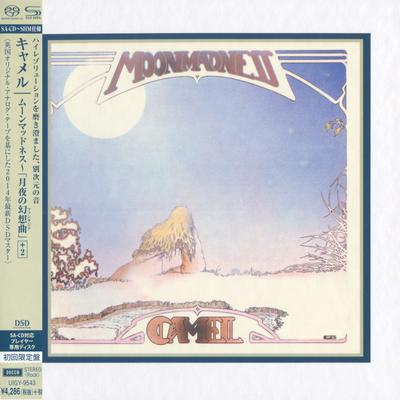 Abandoning the lovely soundscapes of Snow Goose, Camel delved into layered guitar and synthesizers similar to those of Pink Floyd’s Wish You Were Here on the impressive Moonmadness. Part of the reason behind the shift in musical direction was the label’s insistence that Camel venture into more commercial territory after the experimental Snow Goose, and it is true that the music on Moonmadness is more akin to traditional English progressive rock, even though it does occasionally dip into jazz-fusion territory with syncopated rhythms and shimmering keyboards. Furthermore, the songs are a little more concise and accessible than those of its predecessor. That doesn’t mean Camel has abandoned art. Moonmadness is indeed a concept album, based loosely on the personalities of each member — “Chord Change” is Peter Bardens, “Air Born” is Andy Latimer, “Lunar Sea” is Andy Ward and “Another Night” is Doug Ferguson. Certainly, it’s a concept that is considerably less defined than that of Snow Goose, and the music isn’t quite as challenging, yet that doesn’t mean that Moonmadness is devoid of pleasure. In fact, with its long stretches of atmospheric instrumentals and spacy solos, it’s quite rewarding. ― Allmusic