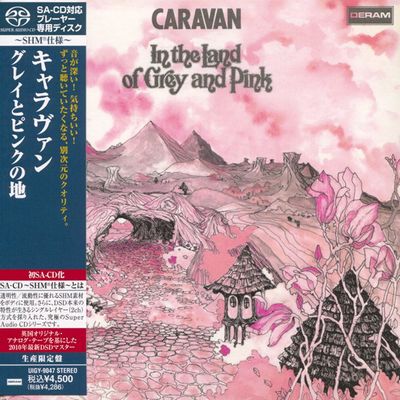 In the Land of Grey and Pink is considered by many to be a pinnacle release from Caravan. The album contains an undeniable and decidedly European sense of humor and charm. In addition, this would mark the end of the band’s premiere lineup. Co-founder David Sinclair would leave Caravan to form Matching Mole with Soft Machine drummer and vocalist Robert Wyatt in August of 1971. As a group effort, In the Land of Grey and Pink displays all the ethereal brilliance Caravan created on their previous pair of 12″ outings. Their blending of jazz and folk instrumentation and improvisational styles hints at Traffic and Family, as displayed on “Winter Wine,” as well as the organ and sax driven instrumental introduction to “Nine Feet Underground.” These contrast the decidedly aggressive sounds concurrent with albums from King Crimson or Soft Machine. In fact, beginning with the album’s title, there seems to be pastoral qualities and motifs throughout. Another reason enthusiasts rank this album among their favorites is the group dynamic which has rarely sounded more singular or cohesive. David Sinclair’s lyrics are of particular note, especially the middle-earth imagery used on “Winter Wine” or the enduring whimsy of “Golf Girl.” The remastered version of this album includes previously unissued demos/alternate versions of both tracks under the titles: “It’s Likely to Have a Name Next Week” and “Group Girl,” respectively. The remastered disc also includes “I Don’t Know Its Name (Alias the Word)” and “Aristocracy,” two pieces that were completed, but shelved in deference to the time limitations imposed during the days of wine and vinyl. The latter composition would be reworked and released on Caravan’s next album, Waterloo Lily. The 12-page liner notes booklet includes expanded graphics, memorabilia, and an essay penned specifically for the reissue. ― by Allmusic