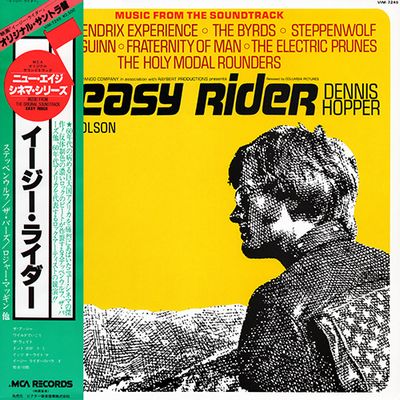 Easy Rider was the surprise box-office hit of the summer of 1969, a low-budget film about a couple of hippies who use their profits from a drug deal to drive their motorcycles across the Southwest and attend New Orleans’ Mardi Gras celebrations, encountering adventures and tragedy along the way. It turned out to be a telling portrait of America’s cultural divide in the late ’60s, and no small part of its impact was the soundtrack music, which eschewed a traditional score (the filmmakers couldn’t have afforded that, anyway) in favor of rock music. Even then, director Dennis Hopper didn’t have much special music written, instead mostly using songs he’d heard on the radio in 1968 while he was editing the film. (In the liner notes to the 2000 CD reissue, Hopper claims that he canceled a proposed Crosby, Stills, Nash & Young score when he became enamored with his own selections; other accounts claim the film studio insisted on the music used in the rough cut.) ― Allmusic