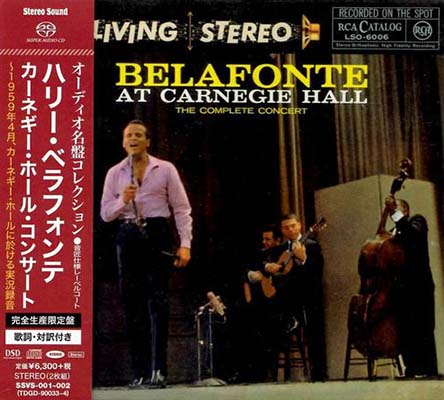 The granddaddy of all live albums, this double-LP set captured the excitement of a Harry Belafonte concert at the height of his popularity. Sampled from two consecutive performances of identical material, Belafonte at Carnegie Hall was an anomaly at a time when only comedy albums were recorded outside of the studio environment. END_OF_DOCUMENT_TOKEN_TO_BE_REPLACED This is the album that made Harry Belafonte’s career. Up to this point, calypso had only been a part of Belafonte’s focus in his recordings of folk music styles. But with this landmark album, calypso not only became tattooed to Belafonte permanently; it had a revolutionary effect on folk music in the 1950s and ’60s END_OF_DOCUMENT_TOKEN_TO_BE_REPLACED