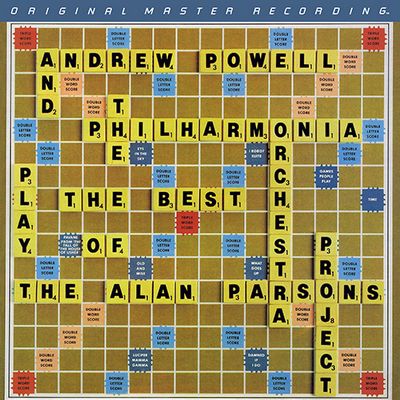 The rather wordily titled “Andrew Powell and the Philharmonia Orchestra Play the Best of The Alan Parsons Project” was mainly recorded at Abbey Road, with the exception of the orchestral session for the I Robot Suite, which was done at CTS in Wembley. It was Helmut Fest at EMI Records who suggested using the Scrabble board as a way of getting around the world’s longest album title. One of the biggest difficulties I found in orchestrating these tunes is that certain kinds of “rock” themes sound like muzak if they are played by a violin or other string section: hence the solo sax on Games People Play.

I also deliberately started some of the tracks with an intro which didn’t give the following song away! The I Robot Suite was an interesting challenge – at times there are themes from two songs being played at once as counter-melodies to each other – it was fun to try to link songs whose musical styles were quite different: I wanted to do something different with one of my favourite albums. —by www.andrewpowell.com