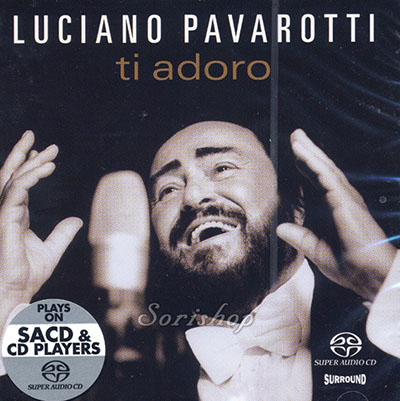 Luciano Pavarotti has long avoided doing the kind of solo crossover release often proffered by his Three Tenors comrades Plácido Domingo and José Carreras; indeed, in his liner introduction he claims that he was initially “very skeptical” of this project. He came around, though, and the result marks his first solo album of any kind in years. Catty opera cognoscenti hoping for an embarrassment may be gratified by a few booklet photos (keep that shirt on, Luciano!), but otherwise they’re out of luck. The music is actual modern Italian pop rather than the sort of international sentimental style that seems to have been dreamed up in a marketing department, not a music studio. The songs included are mostly originals (several by producer Michele Centonze), and though they vary in quality they don’t rely on the kind of flabby familiarity that can doom a crossover project artistically. (An adaptation of Nino Rota’s old Love Theme From Romeo and Juliet will please Three Tenors fans.) The style is vocally oriented and suits Pavarotti well; electronic accompaniments are quiet and rarely compete with his voice. The singer even has fun with the quasi-rock & roll title track and with a portrait of the aging Caruso, featuring Jeff Beck on guitar. His age is clearly audible, but he’s still got it. Some have suggested that Ti adoro represents an attempt on the part of Pavarotti’s label Decca to compete with the current crop of teen-classical crossover divas. If so, the attempt is misconceived and proves little — except that he could teach them a thing or three. On its own terms, however, it works just fine. You might even wish he’d done it ten years ago, but even so you won’t find another 68-year-old who can sing with this kind of verve. ― Allmusic