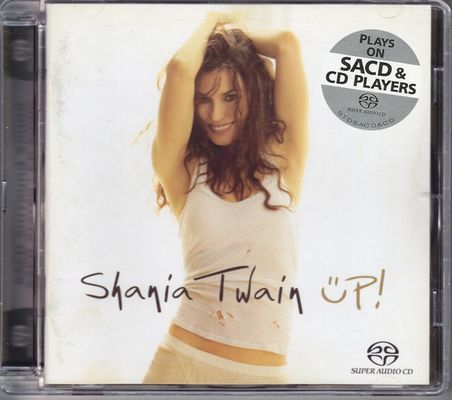 When Up! was released in November 2002, Shania Twain revealed in one of many promotional interviews that she writes far more songs than can fit on her records and that she hides any personal, introspective songs she pens, not even playing them for her husband and collaborator Robert John “Mutt” Lange. Now, this is certainly a psychological quirk worth exploring, but it also suggests why Twain’s albums are such brilliant pieces of mainstream pop. Anything that doesn’t fit the mold is discarded, so the album can hum along on its big, polished, multipurpose hooks and big, sweeping emotions. This is Super-Size pop, as outsized and grandiose as good pop should be. And, unlike the work of most pop divas, where the subject matter is firmly about the singer, none of the songs on Up! are remotely about Shania Twain, the person — let’s face it, she’s never faced a situation like “Waiter! Bring Me Water!,” where she’s afraid her guy is going to be stolen away by their hot waitress. No, these songs have been crafted as universal anthems, so listeners can hear themselves within these tales. Just as cleverly, the songs are open-ended and mutable — always melodic, but never stuck in any particular style, so they can be subjected to any kind of mix and sound just as good. (Indeed, Up! was initially released in no less than three different mixes — the “Red” pop mix, the “Green” country mix, and the “Blue” international mix; sometimes the differences in mixes were so slight, it sounded like nothing was changed, but each mix revealed how sturdy and melodic the structure of each of the 19 songs was, and how they were designed to sound good in any setting.) True, the sheer length of the album could be seen as off-putting at first, since these 19 tracks don’t necessarily flow as a whole. Then again, part of the genius of Up! is that it’s designed as a collection of tracks, so the album is durable enough to withstand years on the charts, producing singles with different textures and moods every few months. Time revealed Come on Over as a stellar pop album, and the same principle works for Up!. Upon the first listen, singles seem indistinct, and it seems like too much to consume at once, but once you know the lay of the land, the hooks become indelible and the gargantuan glossiness of the production is irresistible. In other words, it’s a more than worthy follow-up to the great mainstream pop album of the late ’90s, and proof that when it comes to shiny, multipurpose pop, nobody does it better than Shania Twain. ― Allmusic