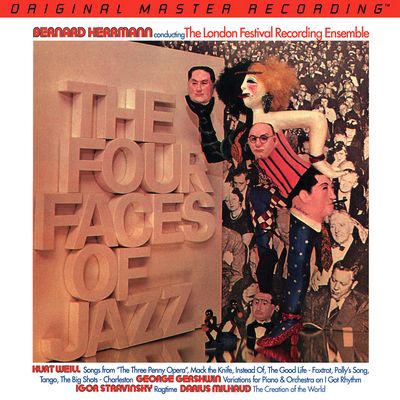 This delightful release, from the Indian Summer of Bernard Herrmann’s recording career, always got neglected by its potential audiences, ignored by Herrmann’s fans in favor of his recordings of his film music or his own classical compositions (or more conventionally familiar works such as The Planets) and missed totally by jazz listeners of a historical bent. The material contained herein is distinctly symphonic or — perhaps more accurately — concert hall jazz, the work of established composers coming to grips with and using the then-new music in their own idiom. Two at least, “Songs from ‘The Threepenny Opera'” by Kurt Weill, and the “Variations for Piano & Orchestra on ‘I Got Rhythm'” by George and Ira Gershwin (with David Parkhouse as piano soloist), will be familiar to general audiences, and it is remarkable how well Herrmann — who had notably slowed down his choice of tempos late in life in his orchestral recordings — acquits himself on these as a conductor, leading the London Festival Recording Ensemble. He still had a light touch, flexible touch, and, indeed, manages in the Weill piece to evoke echoes of his own music from Citizen Kane while remaining true to the Weill material. The Mobile Fidelity Ultradisc II edition of the CD of this relatively obscure Decca/London “Phase 4” album is also notable for its vivid timbres and textures — it sometimes feels as though the instruments are not only right there in the room with you, but almost right in your lap. The Stravinsky “Ragtime” and Milhaud’s “The Creation of the World” are less familiar to the general public, but may well delight them with their singular takes on the American jazz idiom, Milhaud’s being the bolder at nearly 18 minutes and intended as a ballet score and built around the same configuration jazz orchestra that he’d seen playing in a Harlem club on a visit to America. It’s easily the most complex and challenging piece here, but no more so than the best of Duke Ellington’s symphonic jazz scores, and is one of the more delightful pieces in Milhaud’s output. ― Allmusic