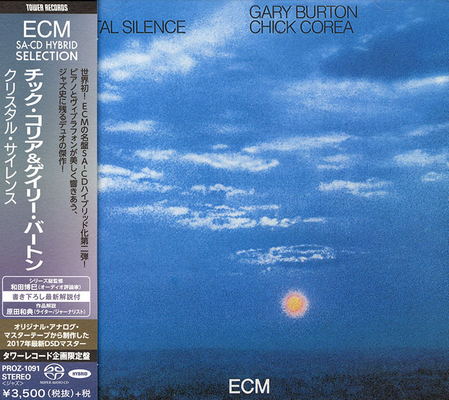 For Crystal Silence, the first of several partnerships between Chick Corea and vibraphonist Gary Burton in the 1970s, the two musicians selected an interesting array of material. The compositions on this record are all modern ones, either by Steve Swallow, Mike Gibbs, or Corea himself. It is a mostly downtempo affair, which allows each player to stretch out and play highly melodic solos over the often difficult changes. In keeping with most ECM releases, there is a distinct presence of European elements to the improvisations. There are few overt blues or bebop phrases, Corea and Burton opting instead for modern melodies to fuel their improvisations. Burton has managed to internalize the Spanish and modal implications of Corea’s tunes with little difficulty, and solos with joyful ease through such tracks as “Señor Mouse.” Corea himself is absolutely burning. His solo contribution on the same track is both fiery and introspective, combining in one statement the poles for which he is best-known. The title track is also the centerpiece of the album, a nine-minute exploration of the Corea ballad that first appeared on his Return to Forever record in 1972. In keeping with the tradition of the great masters of the ballad form, time seems to disappear as Burton and Corea lovingly caress the song’s simple melody and dance effortlessly around the chords, building intensity only to let it subside once more. Crystal Silence is a sublime indication of what two master improvisers can do given quality raw material, with the first side of this record being particularly flawless. Improvised music is rarely this coherent and melodic. Essential for fans of Corea, Burton, or jazz in general. ― Allmusic